I remember the original wording of this task when I first saw it in July 2013, when I was auditioning for my role as host. In its original conception, the task was interviewing a chef at a restaurant. I was so excited about this task that I performed the task without being prompted. I was still relatively new to Chicago then, and I loved trying out new restaurants. For a while, I went to at least one new restaurant every week, and it was fun, because I loved the newness of Chicago, and I loved food.

I still love trying out new restaurants, though I do it with much less regularity these days. I still love food. In fact, my love for food is constantly growing, but I no longer throw money at food with the same reckless abandon. Maybe it’s my frugal Chinese nature, or maybe it’s just because I’m poor, but I’ve been trying to figure out how to eat on less and less money. I’ve been living on $25 of groceries a week, and I eat well. For Chinese New Year, I fed 40 people with $130, and there were leftovers.

I met Tyler in 6th grade. He was my classmate at this little Catholic school in Kansas City. He invited me to his birthday party in 1997, and we’ve been friends ever since. We went to the same high school. We parted ways for college, and he taught English in South Korea while I trudged through graduate school with increasing bitterness. Now, he’s about to finish graduate school himself, with presumably less accumulated bitterness. He just turned 30, and I will turn 30 soon. We went from seeing each other almost every day to seeing each other 2 or 3 times a year. He’s been living his life, and I’ve been living mine. Despite that, we can still call each other best friends without a trace of doubt. We take verbal swings at each other that are as cruel as they are clever, and that never fails to make people around us uncomfortable. We function on such apparently asynchronous wavelengths, but whenever we get together there’s always some sort of constructive interference.

And yet, I sometimes wonder how our relationship has changed over the years. So when he flew into Chicago for his niece’s first birthday, I hijacked part of his weekend and tried to grill him with questions.

Things did not go as planned. Tyler, true to his manic self, had packed so much into his brief stay. I, true to my obsessive self, had dedicated much of the weekend to playing Diablo III (It was the beginning of Season 2.). Even our planned sit-down serious-face all-business interview session was sabotaged by our sudden craving for reasonably priced red wine and discount Dunkin’ Donuts after dinner with friends. 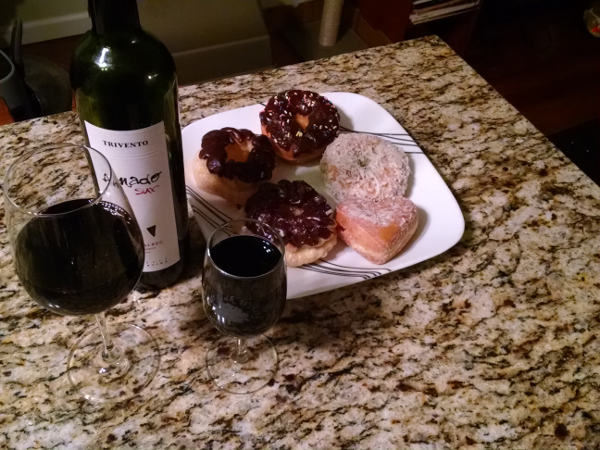 At the beginning of the interview, Tyler warned me that I would never remember anything from it. I drank my second glass of wine and called bullshit.

I hate it when I’m less right than Tyler is. Much of the conversation was a blur. But then again, most of our conversations are. We talked about turning 30 and our 20s and entitlement and regret and relationships and jobs. Everything blended together, and nothing was off-limits. Tyler felt all of his individual time/effort investments were worthwhile, but was frustrated that they have not paid off in a satisfactory way. I felt I had the best job in the world, but was frustrated that I was not working enough hours. Tyler didn’t like how hard it was to go on dates in DC, I didn’t like how self-absorbed and negligent I was when it came to dating. Tyler was scrambling to find a job now that his graduate career is nearing and end, and I was scrambling to find motivation to do new things.

In the end, nothing was resolved, but nothing had to be. I think we both knew what we wanted and how to get what we want, but we needed to hear someone other than ourselves say it. At one point Tyler said something really funny, and I went on record to say I was going to remember it and tell the world about it. Curse you, wine and donuts, curse you.

However, I do remember some of our conversation on the walk back home from the restaurant. It was wet and cold and the wind rent our exposed faces. Instead of taking the train, we decided to walk through Lincoln Park and check out Tyler’s brother’s family’s future home. Our journey took us through an explored patch of Lincoln Park north of DePaul, and we discovered an adorable little Italian restaurant on the way. Between Tyler’s constant (and only half playful) questioning of my grasp of Lincoln Park geography, I asked Tyler how we became friends, or at least how he remembered it.

“We both sat in the back of the class.” He replied.

“So… we’re friends because we sat next to each other?” I asked, slightly incredulous. I was hoping for something deeper, something more profound.

“Yeah. Also, I thought it was bullshit that Charlie was assigned to be your friend on your first day of class. You can’t just assign people friends.”

Tyler remembers a lot more about our earlier years than I do. He remembers the school ski trip and how he, an accomplished skier, was stuck in the beginner class with me because our supervising teacher was clearly playing favorites. He remembers the names of our Quebecois pen pals. He remembers the seating arrangements in our middle school classes. That’s my Tyler: so detail-oriented.

Just as we can’t be assigned friends, we can’t make the beginnings of our friendships more profound and meaningful than they actually are. Not even our best friends are free from that fate. But then again, they don’t need to be. It’s not about how it all began, but about how it endured the test of proximity and time and everything else life threw our way.

And that’s enough for me.

Since that was a botched interview, I thought it would be fun to answer some questions myself. I felt like it would be cheating to write my own questions, so I consulted a board game called Loaded Questions, which contains a collection of ice breaker-esque questions. Traditionally, I’ve answered the questions with the intention of maximum subterfuge/shock value/chance of getting a (cheap) laugh. 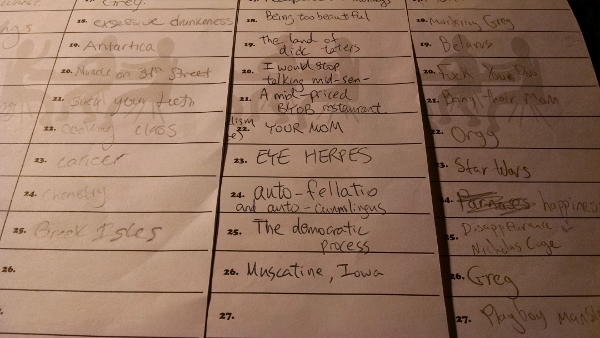 Maybe I’ll bring the questions to the show, and we can all take turns answering silly questions about everything and nothing.

Permanent link to this article: https://storyluck.org/wai/