Journey to the End of the Night

JOURNEY TO THE END OF THE NIGHT

Originally created in 2006 by Ian Kizu-Blair, Sean Mahan, and Sam Lavigne, Journey to the End of the Night is a game that puts players in the middle of a cinematic chase scene through a city at night. With over 5,000 players all time, it is one of the most successful street games in the world with runnings in San Francisco, New York, Los Angeles, Berlin, Vienna, and of course, Chicago!

For the latest information on the upcoming Journey stay tuned here

Everyone! Make new friends, bring old ones, and find new ways to adventure in our city!

The game is super fun, and the more people that play, the merrier! This is an intense game, capable of changing your perspective on the entire city. But while it will test your mettle, Journey is not an exclusive sport by any means – players range from spunky 18-year-old athletes to computer geeks to 50 and 60 year old common citizens. Journey is not a competition of youth and strength, but a game to test yourself against the city. This is liberty through genuinely free, self-conscious, authentic play.

How does it work: Gameplay

This is a footrace–only your own two feet and public transit are permitted. No bicycles, no skates, no cars, no taxis.

You will meet at a pre-determined meeting place. There you will receive a map and two ribbons.

The blue one will be placed on your arm. The red one will go in your pocket.

Beginning at 7:00pm you will follow the map across the city trying to make it to the secret checkpoints as quickly as you can. All the while you’ll be chased by robots wearing red ribbons.

If you get caught, you will hand over your blue ribbon as a prize to the chaser. You will take the red ribbon out of your pocket and place it around your arm. You are now a robot. The object of the game is to get to checkpoints without getting tagged or to catch as many runners as you can.

1. Chasers (Robots) may only catch one person at a time.
2. You must take the blue ribbon before you tag another runner.
3. Checkpoints are safe zones. No one can be tagged in a safe zone.
4. Safe zones will be noted on the map you receive in the beginning.
5. Public transportation is always a safe zone. The only thing that counts as public transit are buses and trains.
6. If there is an argument about who got caught, you settle it like adults in the dark of night between each other remembering the game is meant to be fun.
7. Everyone who makes it to the finish line is a winner and will receive a prize.
8. The runner who reaches the finish line first wins a trophy.
9. The chaser who captures the most runners wins a trophy.

Where does the route go?

This is classified information and varies from place to place. That said, Journey to the End of the Night aims to give players a fuller appreciation for a city. Organizers create a route to send the pursuit through a variety of neighborhoods with a variety of atmospheres, and volunteers create checkpoints that are strange, fun, and welcoming.

Clever tips on Surviving the Night

Permanent link to this article: https://storyluck.org/journey-to-the-end-of-the-night/ 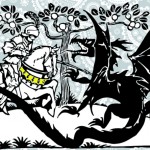 Journey to the End of the Night JEN Columbus 2015
Make a Donation to Storyluck Today!