Enjoy June with These Storytellers

There are stories that I like to consume and those I like to produce. Personally, I prefer to consume fiction and produce non-fiction. Almost every story I choose to tell is about something that really happened to me…with a little embellishment here and there for effect.

So I don’t expect to enjoy listening to Andrew Zimmern, host of Travel Channel’s Bizarre Foods, tell me, and the rest of his audience of nearly 100 at the Printer’s Row Literary Festival, about his travels. Sometimes it stings more than it intrigues to hear about people’s travels to places that I’ve never been and probably won’t go to until I’ve sufficiently paid off my student loans. It’s kind of like watching Food Network if you’re hungry, masochistic. It also doesn’t help that I’m more of an Anthony Bourdain girl. 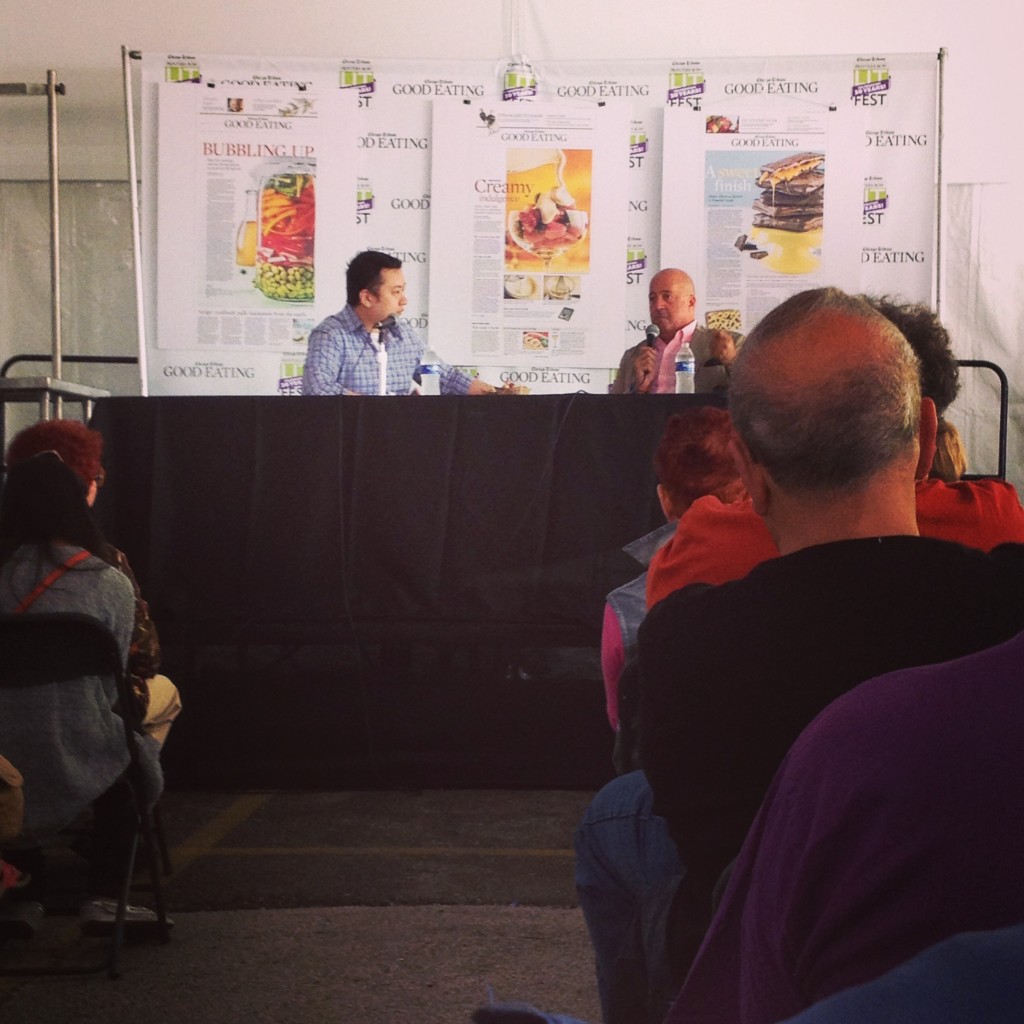 But as with any good story, it doesn’t really end up being about how beautiful the temples of Angkor Wat are during sunset or how quaint the 6th arrondissement is. That would alienate his audience, which is comprised mostly of an older generation who simply doesn’t have the time to visit every place he speaks of.

When Zimmern walks up on the stage, it’s apparent by the chemistry between them that he and the host Kevin are already acquainted, which leads to a comfortably self-deprecating rapport. At one point when Kevin hands Zimmern a Chicago style hotdog, and Zimmern says that he wants to “crush these boats,” referring to the paper hotdog dishes, as much as he wants to walk into one of the high end restaurants to which he admits he has backdoor privileges. I can’t tell at first if he is down-to-earth or just trying to seem down-to-earth.

He butters up the crowd by saying that he thinks Chicago has been unfairly classed as a “2nd tier food city.” It might be a cheap thing to say, but it’s the right thing to say. It’s polite in a way, like musicians who claim every city is their favorite to play in.

Kevin introduces Zimmern by categorizing him among the three best food/travel TV gurus along with Anthony Bourdain and Alton Brown, but Zimmern is quick to explain why he thinks this is. He says that it’s because the three of them have leverage with their networks to make the quality content that they want. He even admits that there is better talent out there, but it lacks the connections necessary to bring it to a wider audience. This resonates with me, and I could guess would resonate with anyone who dares to call herself a writer or a creator.

I’m warming up to him, trusting him more and more as a storyteller, someone who isn’t going to impose authority over his audience. He doesn’t speak with authority, which I like. I mean, screw ethos.

I scratch at the backs of my legs that are sticking to my plastic chair. It’s uncomfortable, but I’m glad I’m sitting in an aisle seat and have a straight shot of Zimmern. His face is how I know he’s being authentic. It brightens and crinkles at all the right moments.

His face suddenly blanks out, getting serious. He says that it all started when he got sober and realized that he didn’t like how narrow his perspective was. The show was a way to teach patience and understanding. His presentation at the festival demonstrates this even to someone like me who has seen only a few episodes.

His travel anecdotes have a depth to them that isn’t constructed or rehearsed. In one he tells of a family in Madagascar who lived in what we, in a first world country, would deem “extreme poverty.” The wife went out into her yard and started digging, which Zimmern didn’t understand at first until she pulled out a tin box of instant coffee. It was their family’s one true possession, buried underground for several years and saved for a special occasion. Zimmern says that these gestures have humbled him and made him a better person.

“I’m the best version of me when I’m traveling,” Zimmern tells us. He doesn’t like the version of himself he is when he’s at home and his wife’s telling him to put the cover on the grill before it rains and he’s ignoring her to watch hockey, but he says, “Put me in the real world and I’m kind of a badass.”

This is my favorite thing that he says during the hour. It’s the one that resonates with me the most, because trekking down to Lincoln Park and then taking public transportation to the festival was kind of a big deal to me. Finding my way back is an even a bigger deal. I’m proud of myself when I make it back to my car successfully. It’s silly, but for a strictly suburbs girl it took a gutsier version of me to be unafraid to get a little lost.

I don’t just step outside of my comfort zone, I expand it, which is what Zimmern is all about. As his final story, he talks about his son who refused to try a root beer float for the first ten years of his life despite his father’s insistence of their complete deliciousness. At some point his son tried one at a birthday party and from then on proceeded to eat one a day for a while until his parents finally had to cut him off. Zimmern finishes the story, staring out into the audience before he delivers the final bit that’s clearly going to tie it all together. He says,” you never know what’s going to be your root beer float” and thanks the audience before accepting questions.

Permanent link to this article: https://storyluck.org/the-metaphorical-root-beer-float/