Love on the Morning Commute

I received Aida’s letter in the mail today. It was… a little soggy. The text was still legible, but the picture was ruined. Aida sent me a picture of the original though. Want to see? 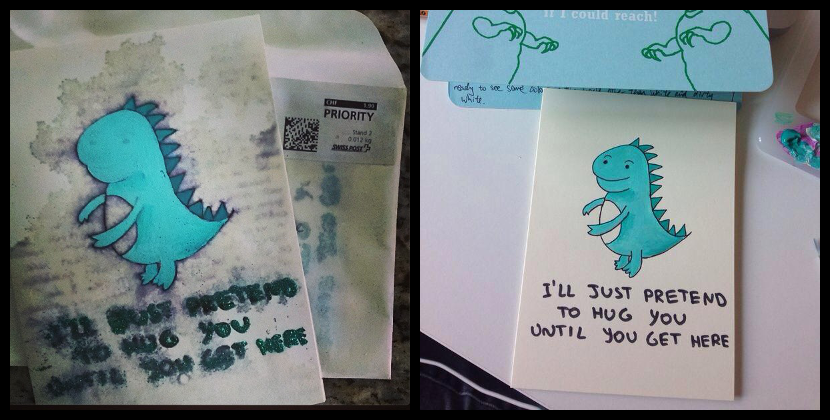 I met Aida last June via CouchSurfing. She never stayed with me, but we baked Totoro-shaped macarons together. When she asked to borrow my mixer so she could bake a cake while she was visiting, I knew she was more awesome than I had bargained for. She lives in Geneva now. I’ll have to write her a reply and keep the correspondence going. There’s something romantic and quaint about handwritten letters.

Stacy from One More Cup just offered to send me some loot! I haven’t lived in Kansas City since October 2011, and the last time I saw Stacy was around Christmas last year. Yet as soon as I jokingly mentioned I wanted some loot on Facebook, she offered to send some to me! I love loot!

In celebration of April Fool’s Day, I’m going to act suspicious but mean everything I say and do everything I promise. Let’s hope nobody asks for my passwords.

One of the things I did was mentioning National Letter Writing Month and asking whether anyone wanted letters. Only three people did, and one of them was my roommate! This does make my life easier though: I only have 4 letters to write this month. I’m sending my roommate a post card. Given the track record of our mail lady, there’s a good chance she’ll never see it.

You know, I really wish more people would come to the show. The stories from the audience were great tonight, and I got to ramble on and on about bugs.

Next month’s theme is Love Letters. I think I’m going to pretend to be a girl so people might actually answer my letter. The name “Duo” is pretty androgynous, right? Maybe I’ll drive the whole girl thing home and sign it as Danette instead.

Hey! I got a better idea. I’m going to pretend to be a little kid and throw love letter paper planes off a tall building. It will involve crayons and intentional misspellings. It’ll be interesting to see how people write love letters back to a 2nd grader.

Maybe there will be candy vans.

Today is my birthday, and look what showed up in my mailbox! 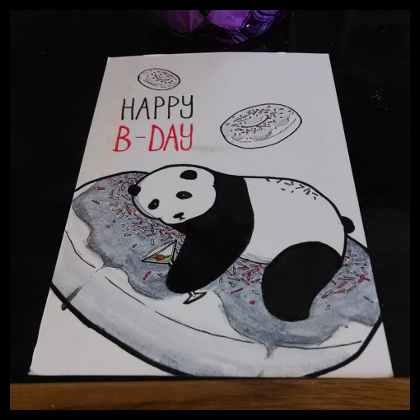 Isn’t that amazing? Of course it’s amazing. It’s a panda. Drunk on martini. Riding a flying donut. Ji should totally quit law school and become an illustrator. Oh, right! I met her on CouchSurfing too, and she stayed with me a few times. The really cool part, though, is we actually grew up really close to each other in Beijing! Of course, I didn’t know at the time, but still, you know?

It’s 11:30 PM and I just got home from Milana’s. I’m pleasantly tipsy still, and I haven’t even started writing the letters. I had a great idea this morning though, and I’ve typed out what I want to say in the letter.

The author Jeffrey Eugenides once wrote, “Every letter was a love letter.” As far as love letters go, this one is a little strange: for one, we don’t know each other. If you’ve opened the envelope and read this far though, chances are I’d like you should our paths cross.

April is National Card and Letter Writing Month. Won’t you share the joy by writing a letter to someone? Enclosed are a stamped envelope and stationery — all you need to do is write/draw something and then address it.

It’s so easy to be cynical these days, but I’d like to believe that you will send a letter, and I thank you in advance for your effort.

I’ve been making my love letters for the last 3 hours. I made 4 copies of the letter by hand — it’s weird, but I got really self conscious about my handwriting, which makes no sense since it’s very unlikely that I’ll know the person who reads the letter. And, because Chicago is so windy and I don’t want the letters to blow away, I made letter weights out of pretty rocks, strings, and origami cranes. I forgot that I had completely forgotten how to make origami cranes, so I had to watch a video. Take a look! 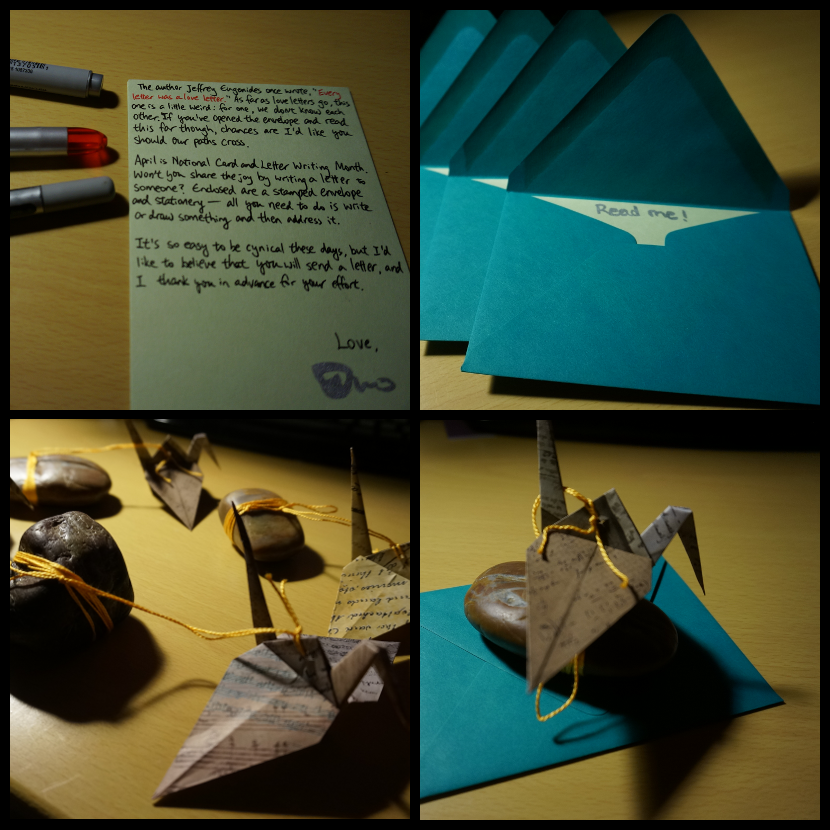 I’m sure I could attach some symbolism to the crane and the rock, but it’s 2:40 AM, and I’m going to get some sleep.

I woke up at 5:10 AM. That is, I finally gave up on trying to fall asleep by then. So, I’ve been running on adrenaline and caffeine for the day. If I say something upsetting, apologies in advance.

I wanted to drop off 3 of the 4 cranes before meeting my friend David at the gym at 8 AM, so I went straight to Belmont harbor. Timing worked in my favor, and the sunrise set a great backdrop for the first crane. I put the second crane by one of the lion statues in Lincoln Park zoo. I put the third crane in a broken water fountain in Lincoln Square.

At this point, I realized that I was subconsciously going from the area with the least foot traffic to the area with the most foot traffic, and my anxiety was increasing accordingly. As I was placing the third crane, people from the neighborhood were heading to work, and so I was trying to act as inconspicuous as possible. Most people didn’t seem to care what I was doing, but I was on edge anyways. After gym and before heading to Millenium park, I couldn’t help but to take a peek at whether anyone had picked up the third crane. Nobody had. At that point I almost didn’t want to head downtown, but I did anyways. 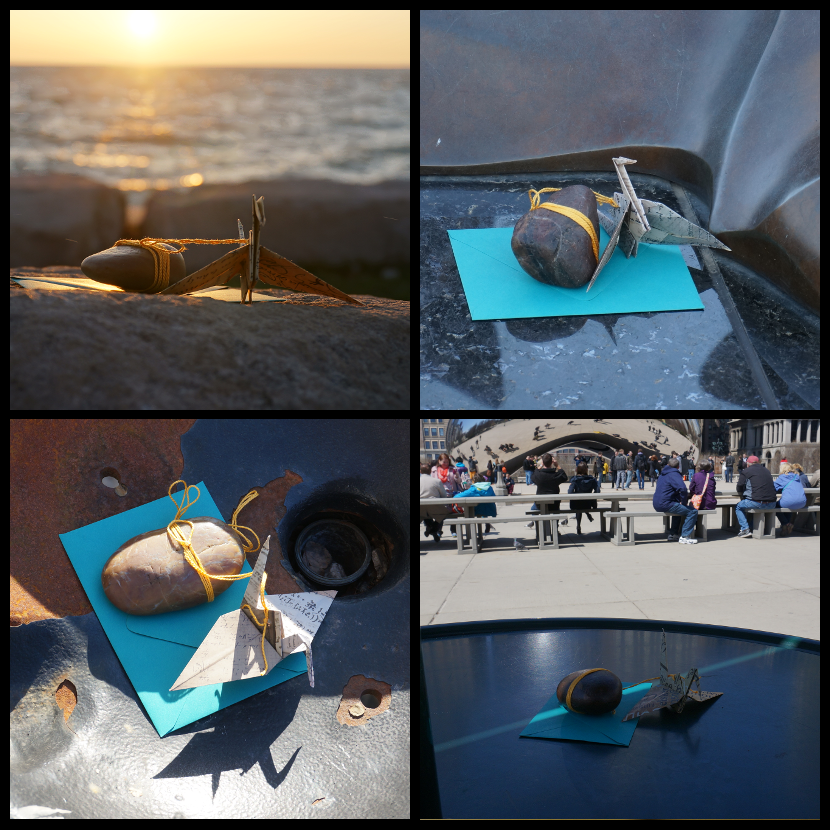 I hope people read my letter and write their own. I really do. I want them to write back to me too. There’s enough information on the card for the willing and the resourceful to find me. I know I said “I believe” in the letter, but the idea that nobody really cared about my silly project has been gnawing on my mind all day. Sentimentality is just another word for naiveté.

I checked the sites, and the letters are gone! Well, I checked three out of four: it wouldn’t be unreasonable to assume the one in Millennium park is gone as well. There is hope! YES!!!

I also finally wrote my letters today. I know, I know, I dragged it out forever and now April’s almost over, but it’s still April! The letters are in the mailbox right now. I can’t wait for people to receive their letters! 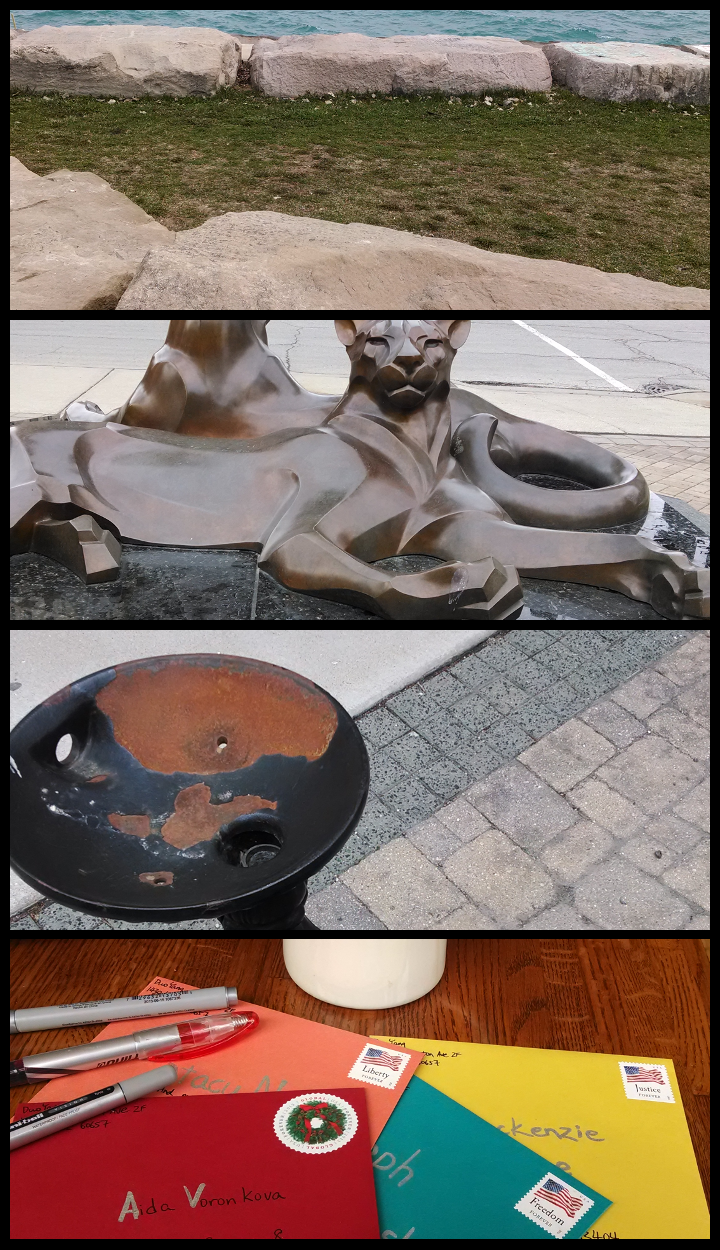 Also, I just saw this today (this happened a while ago), but look at what Stacy did! Great minds think alike! And this is why One More Cup is my favorite coffee shop of all time.

And thus my adventure concludes. Maybe I’ll see you at the next show?

Permanent link to this article: https://storyluck.org/dearly-beloved/