A Month Of Dreams — The Team Task

2 Dinners and a Goodbye

My dreams are in 2D. Everything looks like it’s straight from a cartoon. I’m not only aware that I’m dreaming, but I can also control my actions in my dreams. If I wake up in the middle of dreaming, my dream pauses and I’m able to continue when I fall asleep again. Some people call it lucid dreaming. As far as dreaming go, it’s a pretty sweet package.

I used to have such amazing dreams.

Lately, I’ve been working a lot, and I’m either too tired to dream or dream about, get this, work. Unless you want to know the ins and outs of how I choose to interpret Common Core math standards… well, I used to have such amazing dreams.

The reward for hard work is hard currency, and put that hard-earned currency to use. When my friend offered up a pair of tickets to Next, I bought them and took my BFF there for his birthday. We’re both people who love food, but believe first and foremost in honest, unpretentious food. I had always wanted to try fine dining: not to wallow in decadence, but to have some concrete focus for my hate.

It’s really hard to hate on Next.

Instead of coming off as pretentious, the evening was whimsical. We were presented with a series of culinary allusions, punchlines, and bait-and-switches. One dish tasted like the ocean, from the warm, briny foam layer to the slightly gritty bottom layer resembling calcareous ooze. For our “fish and chips,” our chips were in fact made of fried cod skin. When the waiter brought out a a charred stump with coal-black morsels on top, we were delightfully surprised by the deception: nothing has been charred, but everything was dyed with squid ink. It was the most enjoyable meal of my life.

My favorite and perhaps the most dreamlike part of the meal was a lot simpler in execution than the rest. It was one of our desserts. The waiter brought out an olive tree: small enough to sit on the table, but large enough to block my view of David.

The waiter smirked. “There are two pieces of white chocolate hidden in the tree.”

David felt like he had to return the favor, so he took me to Arun’s. While the food was good, it was not nearly as fun as Next. However the dining room was absolutely beautiful. Arun’s brother painted a giant mural of the battle between Buddha and demons. And there we were, two dudes eating delicious Thai food, right in the middle of the battle between good and evil. There was so much going on. I’ve always prided myself in having a pretty great imagination, but my brain did not have the capacity for everything that was taking place. 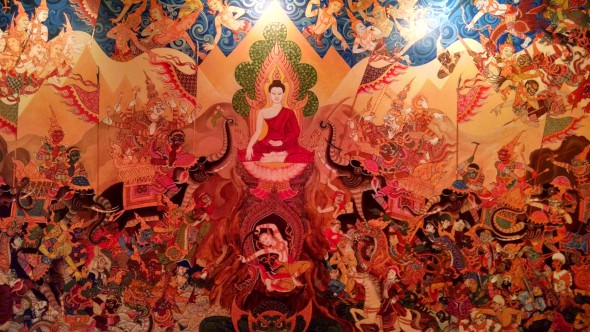 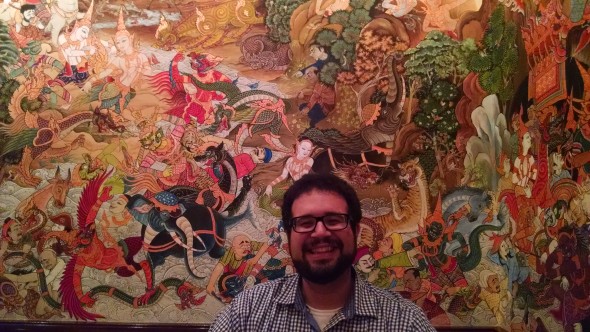 We were celebrating because David got his dream job at Khan Academy. Of course, I didn’t want him to go: the last three years have been so good. But the thing is, I have my dreams, and David has his. It would be most unfair to infringe upon his dream just so I can keep on dreaming.

David is looking for an apartment in the Bay area right now. I wish him the best.

Thus concludes Duo’s journey into dreams! Join us next month for If you post a story about the task “Find the stuff fiction is made from” in the comments here, you get into the show for free.

Permanent link to this article: https://storyluck.org/2-dinners-and-a-goodbye/