Duo, 29, is a mild-mannered man living in Lakeview, a semi-affluent neighborhood in Chicago. During the day, he writes test questions and tutors high school students. In the evening, he cooks, reads, and plays video games. However, in the middle of the night, Duo has other pursuits, pursuits he was hesitant to share at first because they are so stigmatized in today’s world.

Duo is a practitioner of the necromantic arts. He is a novice necromancer.

“I’ve been studying necromancy for almost a month now,” Duo said. “I mean… don’t get the wrong idea. I’m not a superstitious man. Hell, I studied engineering in college, not theoretical physics. I had a very specific goal, and I thought necromancy was the best method for accomplishing my goal.”

Duo was voted by the audience of the storytelling show A Month Of to “build bridges.” More specifically, he was asked to talk to someone he has not talked to for a long time. Like many people his age, his turned to his phone initially. “I thought that would be the easiest thing to do at first,” Duo mused. “but what fun is playing life on easy mode? I have the knowledge and the resources to conquer life on hard mode. Life… and death.”

Duo elaborated. “I’m always happy to hear from my old friends whether or not they have anything interesting to say. With dead people, however, I have a feelings that the conversation is guaranteed to be interesting. For example, my grandfather was a great man in life, and I’d imagine he became an awesome spirit in death. He’s probably already a major official in the Chinese spirit courts, and it would be so great to hear him tell me what the afterlife is like.” 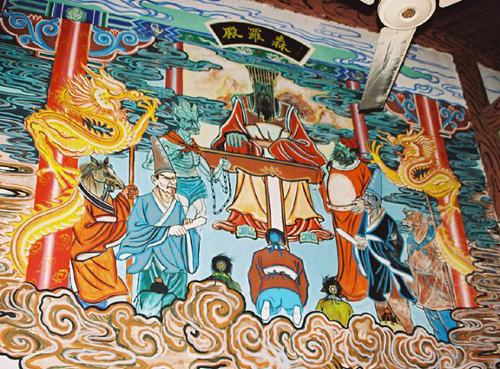 But many obstacles stood in the way of the modern necromancer. “I ran into trouble every step of the way,” Duo sighed. “For starters, there are a lot of books, but very few of them confers any practical knowledge. It was like postmodernism, only postmodernism doesn’t pretend to be anything resembling practicality in the first place.”

Luckily, Duo’s friend Sarah had a small occult library, and she was gracious enough to lend Duo her books and her expertise, as Duo found nothing of use in the various bookstores he had visited. “I keep these books around for research purposes,” Sarah explained. “Some of the books were very hard to find.” However, practical knowledge was obfuscated even amongst Sarah’s well-curated library. Sarah recommends The Black Arts by Richard Cavendish and Witchcraft, Magic & Alchemy by Grillot de Givry. 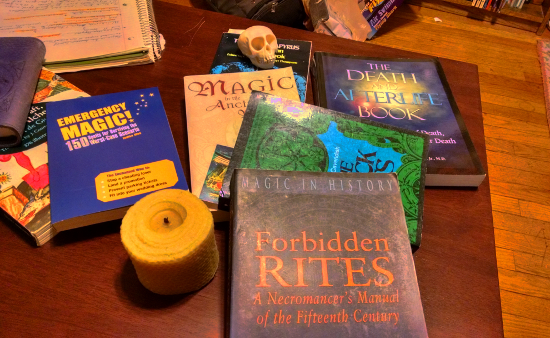 The socio-political landscape was the next obstacle Duo had to navigate. “You know, I thought ‘great, finally something I can put into action.'” Duo lamented. “But after a more thorough reading of the necromantic texts and state laws, we discovered that most of the necromantic rituals required bodies of the deceased, and apparently there are laws in place that prohibit grave robbing.”

“I don’t see it as grave robbery,” Duo added. “For me, it’s more like grave exploration. Of course, that doesn’t help me in the long run, because in China, just about everyone is cremated after death, everyone except Chairman Mao, and I don’t particularly care to talk to Chairman Mao.”

Finding agents of dead bodies was equally difficult. “Feinberg [School of Medicine] wouldn’t get back to me, and the various families I approached at the graveyard thought I was a lunatic. Not even craigslist had that many bodies to choose from.”

At this point of the interview, Duo stood up and began to pace around the room while thinking aloud. “You know, this is an education issue. Necromancy is an important field that bridges the gap between social science and unnatural science, yet the world remains ignorant of its importance. There’s no federal funding. There’s no crowd funding. Without funding there’s no research, and without publishable research results there will be no policy changes. What can I do? I’m neither a monster nor a simpleton! I’m not going to dig up some random corpse to practice on; I need a subscription to a database so I can carefully choose my specimens. Actually, such a database probably doesn’t even exist yet. Damn it, do you see the problem here? it’s systemic.”

“What we need is a public outreach campaign to raise the awareness and cultivate the appreciation of the necromantic arts. Something like the ALS ice bucket challenge, only with blood. Or entrails. Or bloody entrails. Good thing organ meat is still cheap.”

He continued. “And, without research, we’re stuck with rituals from hundreds of years ago. The most recent one of note was Alister Crowley’s. Why do we still need corpses in this day and age? If we had dedicated more time and resources to research, we’d have learned to eschew materials a long time ago. It’s not like we’re keeping the field stagnant on purpose like Texas Instruments and their f**king graphing calculators.”

Duo answered my next question before the words even left my mouth. “Speaking of materials, even if I had somehow gotten my hands on a corpse, the acquisition of the other components is no walk in the park.” He sat down and stared me. “Did you know that out of all the things I needed for the various rituals, warm menstrual blood was one of the easier ones to get? That’s right, menstrual blood was on the easy end of the spectrum, along with black candles and opium. But dead skin from children’s funeral pyres? Froth of rabid dogs? Hump of a corpse-fed hyena? Who stocks this kind of stuff? I couldn’t even track down Dittany of Crete: they wanted me to substitute oregano. Oregano! I’m not making a pizza here.”

When asked whether he had tried some simpler ways to communicate with the dead, Duo voiced his frustration. “Of course I have. I’m an engineer. The simplest way is the best way, unless, of course, the simplest way is also bullshit.” He showed me samples of automatic writing, a supposedly method of communication with the dead. “Basically, you clearly your mind, close your eyes, and scribble on a piece of paper. Here are some samples from previous practitioners.” 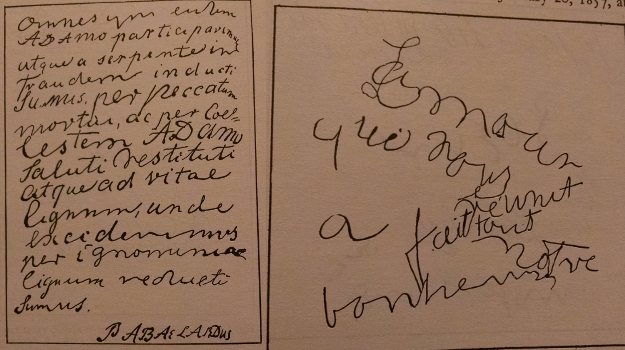 He paused to let me look at everything thoroughly before continuing. “Sarah tried it too. Here’s hers, and here’s mine. Clearly, this method is not for me.” 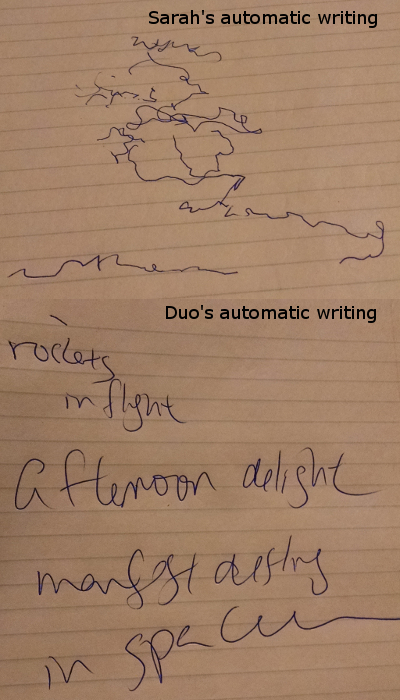 Duo was forced to replicate the rituals to the best of his abilities. “I finally settled on the Bell of Girardius, because that was the easiest one. It saves me from having to buy four cats to impale and a goat to decapitate, and there’s no demonic possession involved, which is always a plus. The best part? No grave robbing required!”

The Bell of Girardius was supposed to be forged on the day and hour of the birth of the necromancer from an alloy composed of lead, tin, gold, copper, mercury, and silver. Various inscriptions were to be made on the bell including the symbols for 7 celestial bodies, “Jesus,” “Tetragrammaton,” etc. The necromancer must then wrap the bell in green taffeta and place it in the middle of a grave for 7 days. After that, the bell is supposedly able to be used as a summoning instrument. 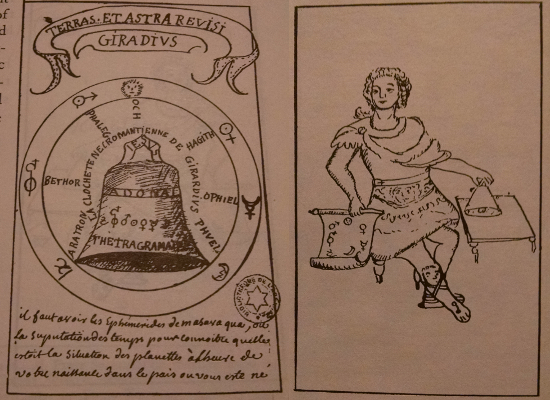 But Duo did not have the time to craft the bell, so he had to improvise. “I borrowed a funeral bell of a 10 year old girl, which was the most macabre bell I was able to find. Her name was Jane Inlow. She lived from 1976 to 1986.” Duo explained. “Instead of carving the symbols and words into the bell, I had to settle for writing them on pieces of paper and affixing them to the bell. First of all, that’s still technically inscribing. Also, since I borrowed the bell, and I’ll need to return it.” Duo also did not have green taffeta. “I have a green intramural jersey with the name SATAN! on it, and I figured that was close enough.” Finally, instead of burying the wrapped bell in a graveyard for 7 days, Duo took the jersey-wrapped bell for a walk in the graveyard by Irving Park and Sheridan. 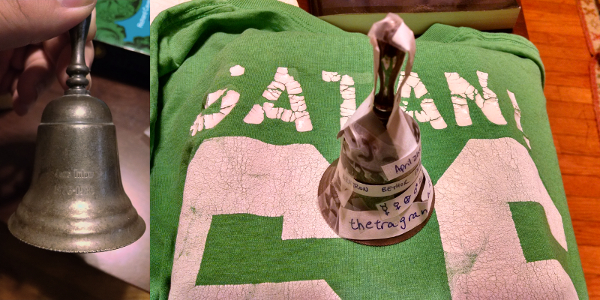 Duo presented the bell and rang it. the bell made a dull sound that lacked resonance.

“You know,” Duo reflected, “I’m not discouraged. For something that was done last minute with more substitutions than the comments section of a food blog, that was a great first step. I’m calling the dead with a telephone made of tin cans and a string, and I feel like I at least got a dial tone,” He rang the bell again. “So, yeah, I think I’m going to keep trying. You know, perform more rituals, channel Katy Perry in Dark Horse, tweet at Joan Rivers, and maybe launch a Kickstarter campaign.”

Permanent link to this article: https://storyluck.org/profile-of-the-disenfranchised-the-modern-necromancer/