This week, I’m going to highlight a piece of writing that was done for A Month Of… Moving On: Destroy something of Sentimental Value. This was written by Jacqueline Brogdon. Who worked for us last summer and runs a great travel blog.

This task, and this show proved to be my favorite A Month Of… celebration. At the show, a man cut his business tie up, a woman stamped out a gift from an old lover, at the group task, people threw rings into the river, and through it all we told stories as we created them.

In this piece Jacqueline gets at the heart of where sentimentality comes from. We aren’t attached to objects, rather the memories they represent. This task and particularly this write up, made me question, how important is it to keep magical foci in our life?

This Month’s task is Maps. Create your own Map. If you post your map here, you’ll get into the show for free. 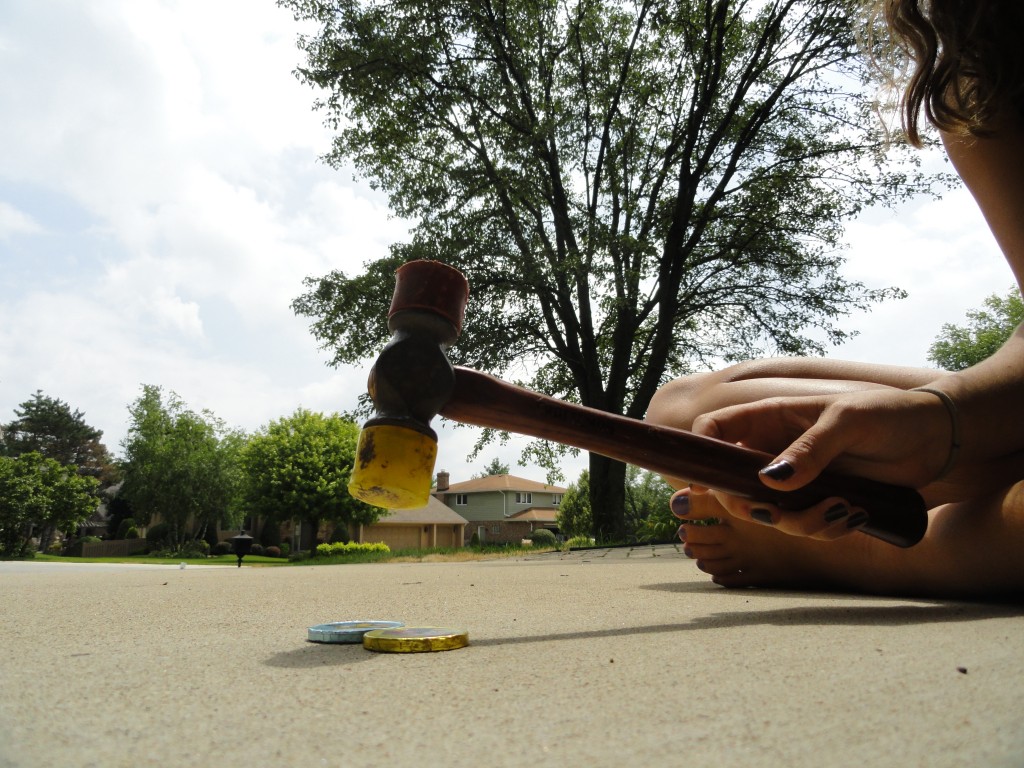 Let me just preface this article by saying that I am an incredibly sentimental person. I can’t throw a ticket stub away or listen to “Landslide” by Fleetwood Mac without melting a little. I’m just an emotional person in general, and I usually think this is a good thing. I’d rather be someone who felt everything and was painfully optimistic than someone who didn’t care.

But after a break-up this past spring, I found myself thinking that maybe I put a little too much stock in the past. I think perhaps that I value things in the past simply because they are no more. So when the “A Month Of” challenge was announced to destroy something of sentimental value, I knew I had to do it just to see if I could. Earlier in the summer I donated all my childhood stuffed animals to the Salvation Army with relatively little post-donation depression, but I was pretty sure that was an anomaly.

I knew exactly where to go for something of sentimental value. I have a shelf in my room that’s filled with little trinkets that all look like junk but are emotionally wrought with meaning to me. There’s a tic-tac container from my first kiss, holy water from my first trip to Europe, and there’s two chocolate coins from a trip to Disney, one of my last vacations with both my parents. These coins would be my victims.

I grabbed them, felt their foil skins in my hand. I took them outside to my driveway where I could feasibly smash the chocolate without making too big a mess. I had the hammer in my hand as I sat cross-legged at the head of the driveway, and was about to smash them before I could think about it too much. But I realized that wasn’t the challenge. I had to let myself feel the emotional attachment and destroy it anyways. So I sat there and let my psyche go back and forth. You can never get them back if you do this. But they’re just objects not the memories themselves. Maybe you could just smash one. But that’s not the challenge!

We’re never attached to objects because of the objects themselves but because of what they represent to us. These coins represented a time in my life before everything got complicated by divorce papers, weekends spent at Dad, and fights over finances. I haven’t been back to Disney since then, when I was seven, and people always say that everyone’s a kid at Disney. But I know that it’s never going to be the same. Honestly, the next time I go I’ll probably be going with my own children.

Just like we’re not attached to objects, I don’t actually think most of the time we’re even attached to a memory but rather a retroactive interpretation of the memory. No memory is ever true. Every memory is just one person’s interpretation of an event. For me that trip was perfect, but for my mom it was the beginning of the end. If I try hard enough I can remember my dad spending most of that trip on his phone talking to someone else. I can remember shortly after the trip my mom discovering the perfume he had bought there for the other woman.

We make memories seem perfect because that’s how we cope. If we thought that everything was always sucky we wouldn’t want to keep going, but looking back on the past and remembering mostly the good keeps us chasing those feelings we had.

When I look at my shelf and those trinkets, if I try I can associate almost as many bad things with them as good things. I’ve spent the last few years, thinking more than I ever have about what I could have had growing up if my parents stayed together. I didn’t think about it too much when I was younger, because I was mostly focused on double the birthday and Christmas presents and bunk beds at Dad’s. But as I’ve gotten to know more people, spent time with their families, seen the long running jokes and the camaraderie, I’ve taken to wondering what if.

What if is dangerous. It’s like waiting for your letter from Hogwarts to arrive. Sadly it’s never going to happen. I knew this and I know this, so I felt the weight of the hammer in my palm and let it come down on the chocolate coins with an unsatisfying clunk. The chocolate was so old, it just kind of shattered, and the whole thing was pretty anti-climactic. Probably because I didn’t really destroy anything, just two chocolate coins that were too old to eat anyways. I’ll always have the memories of that trip good and bad, but at least now I won’t have them sitting on my shelf taunting me with their what ifs.

Permanent link to this article: https://storyluck.org/destroying-things/