I recently posted a listicle of the top ten things I liked about David Sedaris’s Masterclass. I’m going to free associate on those in greater detail now.

Everyone says write every day but there was a snark and condescension in the way he said it that hit home. This apathy and almost disdain for other writers who weren’t workaholics triggered something in me. (It’s important to remember, all links are affiliate links and all quotes are misquotes.)

In this next anecdote he tells, it’s a fill in, a recreation, it didn’t happen specifically because it’s happened generally so many times… that sort of anecdote, “They come to me, and say how do I get published? And I ask them, well have you finished your book. And of course, they haven’t and I ask them, well did you write today? Nooooo, likewise, inevitably. Because people who write every day don’t ask questions like that, how do I get published.”

I’m three courses in, but I want to talk about what Neil Gaiman and Steve Martin said about this phenomena, as they both touched on it in their classes too. Steve Martin said, “They come to me and ask, how do I get an agent, how do I get cast, who should I go to, you know, to get head shots? And I always walk away thinking… shouldn’t you be asking, how do I be funny? Or, How do I get good? You never get that question, rarely. Maybe that’s what you’re asking, by picking up this course… but I guess I don’t know that.”

Gaiman said it in the kindest manner, “If you’re not getting published, you need to try harder. There’s such a voracious need for fiction in this world, the audience for the written word is so huge, especially newly written words that you just have to find that audience. You need to find the person who is too stupid or drunk or such a masochist that they don’t know any better, who wants your work despite its flaws or because of them.”

But all of these people have known success. They all have voracious output. And all three felt, if you are good, success will come. There aren’t great writers who don’t get discovered. That seems to be their feeling. And if you know of some, I’d love to hear the story.

David Sedaris Says it differently though. His twist seems to be, “There are no great writers who aren’t writing.”

That theme repeats throughout his lecture.

I Learn Through the Stories Masters Tell

Another anecdote that struck me, he talked about the dread of missing out on the hard writing days. “If you don’t write every day, you lose those stories. There are days where it just flows out of you, and there are writers or people who claim to be writers, who wait for those days. Oh, inspiration didn’t strike me today, they might say. Whatever the excuse is to not sit and write.”

There’s a famous quote or misquote by Faulkner, “I only write when I’m inspired, it’s just I make sure to be inspired at 8am every single day.” 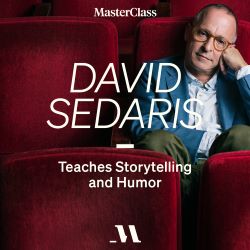 He finished his thought, “When I miss a day of hard writing, it’s gone forever. And I think, boooy you blew it, David. You’ll never get that story again. You’ll never get whatever the perfect line was, you’ve lost it forever.”

Damn, how much time should I spend describing the soul sucking feeling in my gut?

If you aren’t doing a daily practice, how does your craft get better? At what pace? I’ve lost: so much time, so many stories, those perfect phrases that only come from sharing in the pain of the work. I’m ready, to fall in love with writing again. I’m ready to feel so strongly about my work that it pains me to not get it out. I bought the class, and I’m a better writer for it.

Works for Story Luck as a writer and producer. Currently hosts Tertiary Delight along with Priyanka Das.

Permanent link to this article: https://storyluck.org/david-sedaris-masterclass-review-buy-the-book/