My House, My Mind

“Yes, okay! I’m doing a quick little project here. Can you draw me a map of the Chicago neighborhoods?”

For this month’s prompt, A Month of Maps, I briefly considered revisiting a Ghost Bikes of Chicago project, before I stumbled on this crowd-sourced world map, a blobby realization of our 7 continents from the memory of 30 random campus strangers.

Why not see how a random sample* of Chicagoans visualized their neighborhoods and boundaries?

A few things I learned:

I get it. Everyone I asked had a reaction of shame – some of them felt that “they didn’t know Chicago that well,” being “new to the city” (a time span that ranged from 3 days to a few months, it seemed). Others scribbled a few names down with confidence, then found themselves apologizing – “Ok, I’m so sorry, I know Bronzeville should be somewhere around here… and there’s another neighborhood that should be here, it starts with an “A”… and I know there’s that one neighborhood with all the yuppies.”

It is true – every single map-drawing related article I’ve clicked on always pokes fun at the map-makers. Drawing a map from scratch reveals how puny our spatial understanding brains have become, shrunk over the years with the help of the annoyingly motherlike voice of Google Maps. Or how we all conform to similar geographically bunched stereotypes.

“This is like a test,” said one map-drawer. His map is below: 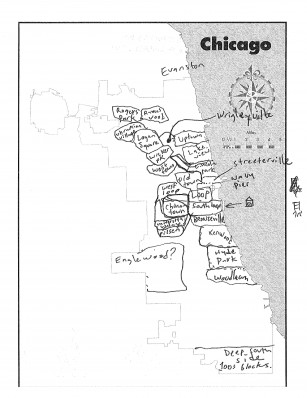 (Could you guess either by his comment or his map that he was an alum from the University of Chicago?)

In fact, if this were a test, it would be a trick test. Community names and boundaries have been constantly disputed by locals, as you might expect. Although the original map did come from researchers at UChicago, the idea was not so much to see how well every city-dweller adhered to those community boundaries as drawn up 80 some years ago as to see how people understood their spaces, where they went, what they called their nooks and corners.

But did I go and look up a current map of the Chicago neighborhoods after I made my own attempt? You bet I did. Here is my attempt, which I do feel fairly ashamed of putting out there. But it is only fair I subject myself to the same humiliation. 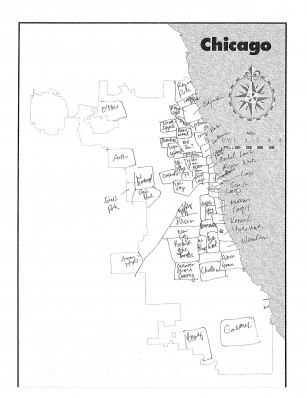 Everyone Knows About Wicker Park

…and (the loop, and Hyde Park, but to be fair, these are the main places I took my survey). It’s a comfort to know that people’s place knowledge did reflect to some extent where they actually lived. But outside of those two locations, Wicker Park showed up most consistently.

It would surprise no one to learn that most of the South and West sections of Chicago were left blank.

On the other hand, people were able to follow the coast of Lake Michigan fairly well. I was particularly impressed by one Turkish lady’s ability to use geographical cues to place various neighborhoods (she found Montrose Harbor and got Uptown pretty much 100% correct). 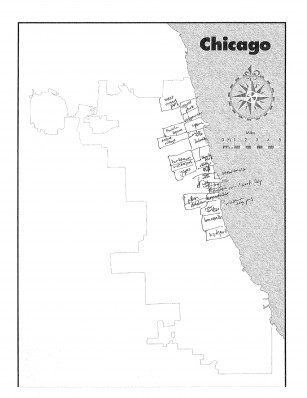 And yes, everyone in West Town lives in “Yuppies” Neighborhood now.

One adorable couple had only been in town for 3 days visiting their friend for her graduation so they knew Lincoln Square as, “that place with all the bars.” 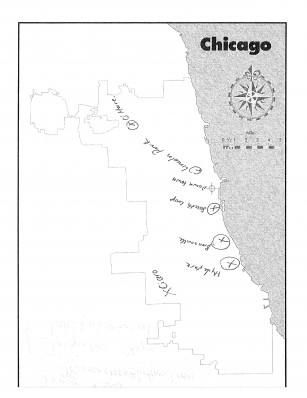 Yeah they wrote their place names upside-down, but they did a bang-up job for 3 days in the city. Perhaps they were looking at maps more than we were? Perhaps. I did a tally of all the place names that people labeled below:

And for fun, here is a table with various suburbs that ended up on our maps:

What I really got from this exercise, though, is that:

Everyone Understands their City Differently

I got zip codes from one lady who was a docent at Loyola University. 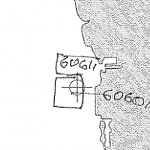 The “Killer War,” “Motown,” and “Atown” locations were all from one man I found sitting on a fire hydrant outside a 7-11. 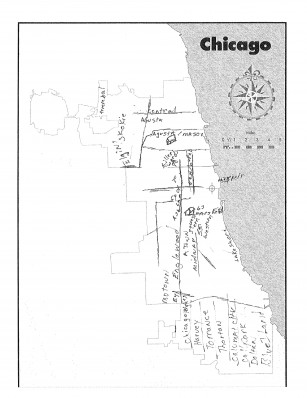 One of my favorites was probably from a self-proclaimed longtime Chicagoan, who had been waiting in the city for her friend on the corner of Van Buren and State for 35 years and 15 minutes too long. She drew me her home, then in each cardinal direction, the highlights – some restaurants, some gas stations, a bank. 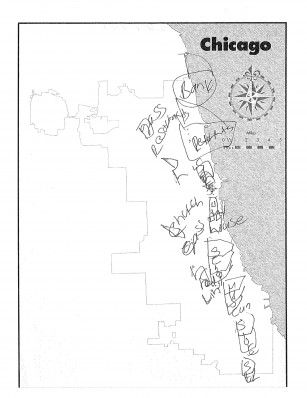 Another interesting map was from a filmmaker who taught classes to aspiring models. He drew out detailed renderings of the three places he spent significant time, and told me what various squares and circles meant on his more symbolically drawn map .

He also gave me 4 free tickets to a Dave and Busters viewing of the Fashion Model Show he produced, this Saturday. So my friends, come on in tomorrow and I’ll divvy them out to a few lucky folk. 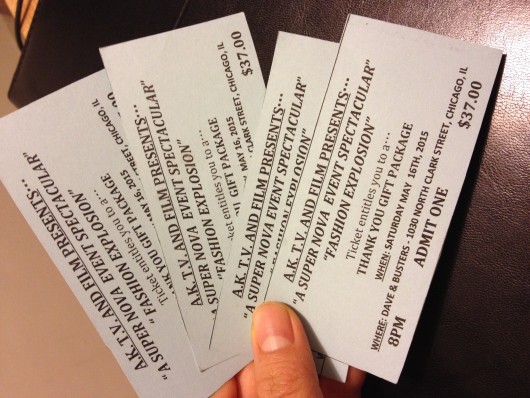 You can see the entire compilation of maps into one giant color frenzy of a map below. If time allows, I will upload all twenty. 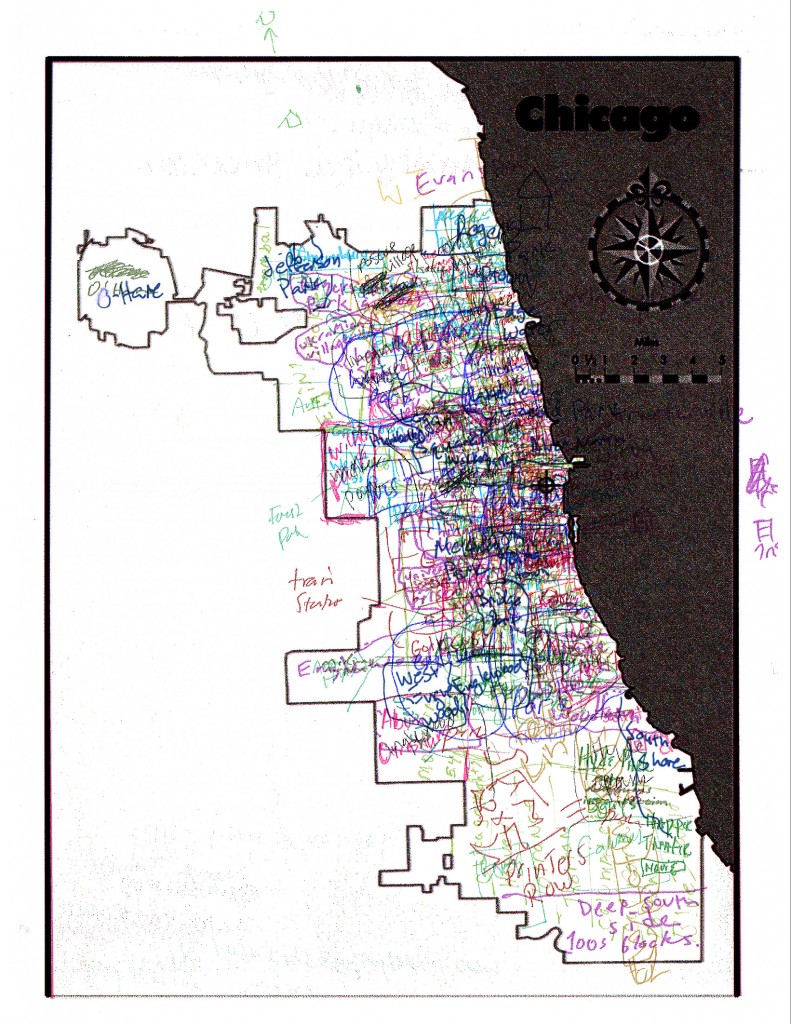 EDIT: Here is the blank map I used while polling folks. If you’d like to draw your own (blind!) and send it to Bonnie@storyluck.org, we’d love to see your map.

Permanent link to this article: https://storyluck.org/20-chicagoans-map-chicago/