Reach Out and Torch Something

No Shirt No Shoes and I Don’t Get Service

I hate this task for two reasons. One: I don’t have much money, which makes dining out repeatedly a losing proposition. The only place I can afford to dine out at repeatedly is the restaurant I used to work at, where the manager consistently buys me food and it doesn’t matter what I wear. Which brings me to the other thing I hate about this task: It doesn’t matter what I wear. Anywhere. As a man, and especially as a white man, studies show that I get a hell of a lot more leeway than other people when it comes to being judged by my clothing. And if I did manage to get a reaction out of someone, the reaction would be something predictable. If I dressed homeless, I’d get treated like I was homeless, maybe. Snore. So I resolved to do this task in the only way I knew how: like an asshole.

As some of you may know, I regularly don’t wear shoes. And as you might suspect, I get kicked out of a lot of restaurants. “No Shirt, No Shoes, No Service” is the un-thinking mantra of many a restaurant manager, grocery store clerk, and, like, Target security guard? It makes very little sense to me, and it drives me nuts, so I set out to prove how ridiculous it was.

The plan: go into a restaurant without shirt or shoes on. Get kicked out. Verify with the manager that the rule was “No shirt, no shoes, no service.” Then come back without pants. I even had the perfect boxers for the job. 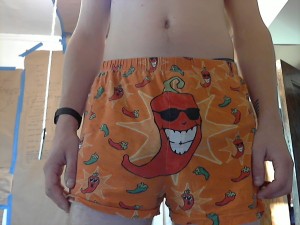 I met Duo on a Tuesday to do the deed. He’d agreed to take video, and had suggested a coffee shop instead of a restaurant, given my financial circumstances. He picked the coffee shop. It was called Heritage Bikes and General Store, and was the definition of a hipster joint. We figured I wouldn’t feel so bad about pranking hipsters with my jibblies.

WordPress won’t let me upload any of my photos, so you’re just going to have to take my word on what happened next. I stripped down to just my pants and a scarf, coasted to a stop in front of Heritage Bikes and General Store on my bike’s failing brakes, walked inside and ordered a muffin.

The cashier avoided eye contact with me, and unenthusiastically kept up her end of a conversation I started about the Lollapalooza shirt she was wearing. It seemed that even this most extreme of measures was not going to get me a measurable response. I went to sit down, and the manager stopped me. She told me that she didn’t want to offend me, but for the sake of the other customers I needed to wear shoes and a shirt in the shop. As planned, I asked her if there were any other rules I should know about. She said shirt and shoes was all, which was exactly what I wanted to hear. Then she apologized profusely for the inconvenience and told me again that she didn’t want to offend me. That part I wasn’t so keen to hear.

Because, see, it’s hard to subject someone to an image of your wang in hot chili boxers when they’re nice to you. And it’s even harder when they’ve got kids. There was one in the shop when I left, and by the time I was back at Duo’s apartment for my costume change, the place was swarming with them. Suddenly a pantsless intrusion didn’t seem like the best idea.

I stomped around the apartment, trying to decide what to do. Tights? Bunny slippers? A coat with no shirt? Suddenly I was overcome with a desire to say “fuck it” to all my high-flown dickery, and just have a nice cup of tea with my friend Duo. I put on my regular clothes and rode back to the shop.

I ordered a cup of tea from the still-sullen barrista, and while we waited for it to steep, an idea struck me: this was a bike shop, and my bike’s brakes were shot. I showed them to the mechanic in the back, and sure enough he was able to completely fix the problem for a mere forty dollars. While i waited for the repairs to be done, I took my tea and sat down with Duo, who I pretended to be meeting for the first time, to avoid implicating him in my tomfoolery. Afterwards, he took me out for burgers to celebrate 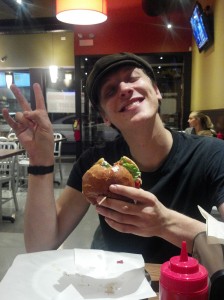 (For some reason WordPress let me upload this picture, but only this one.)

Free from the prying eyes of the coffee-shop people, we began to earnestly discuss the task. How could we spin our experiences? What the hell could we pretend to have learned? Well, the message to me is pretty clear. It’s the same moral that makes me carry a pair of foldable slippers in my backpack, for when people try to kick me out, rather than fighting with them over it. Rules may not make sense, and people may be dumb about enforcing them, but except in cases of grave injustice, being an asshole to the person enforcing the rules isn’t going to solve the problem. Being kind and reasonable works a hell of a lot better. I’m sure the pedestrian I almost ran into on my way home that night appreciates the fact that I managed to overcome my own ego for long enough to get a cup of tea and some brake repair, that’s for sure.

Permanent link to this article: https://storyluck.org/no-shirt-no-shoes-and-i-dont-get-service/