No Shirt No Shoes and I Don’t Get Service

It has only been a few months since I moved to Chicago. I came for a quick bite of sushi with my friend Zach after “work.” “Work” wasn’t going too well, so neither of us was really happy save for the fact that we were spending time with each other. We weren’t in the mood to converse with anyone other than each other. The Chicago Fire roll was delicious though.

Sarah and I had been visiting a different restaurant every Wednesday for weeks. We felt like sushi that week, so we returned to Torajiro. I had just started a new job a few months earlier, and I’ve been enjoying it greatly. I was in a good mood, and it showed. Between the rolls and the nigiris, I began chatting with the sushi Chef. Apparently, he was Mongolian, and he’s been a sushi chef for 15 years. I thought it was really interesting that a man from Mongolia, a landlocked country, became a sushi chef.

I did not eat anything from the restaurant that night. I was trying out jobbing by the lake, and it turned out that nobody, not a single person, had the courtesy to tell me what runner’s trots were. I was in pain, and there was not a single restroom in sight. I walked into the restaurant, in pain, holding my shorts tight so nothing was able to escape.

“Hi, excuse me, I’ve been here before,” I squeezed out a smile while trying hard not to squeeze out anything else, “I really, really need to use the bathroom.”

The sushi chef recognized me, nodded, and smiled. I stumbled toward the bathroom door at a reasonable pace.

The bathroom was occupied. SHIT.

A few minutes felt like an eternity. Just when I was about to lose control, the sound of a flushing toilet gave me hope. I held on for a few more moments, and rushed into the bathroom and sat upon the throne of salvation.

After the agony had ended, I cleaned myself very, very carefully and walked out of the restroom. “I don’t have my wallet on me,” I told the sushi chef, “but I’ll be back tomorrow, I promise.”

I came back the next day with my CouchSurfer. The sushi chef saw us and smiled. It was a busy night, but he sent us some free sushi, compliments of the chef. That night, I learned that the sushi chef really loves the Bulls.

It was Halloween. I was dressed up as hipster Ariel, and what could be more ironic than Ariel eating flounder sushi? 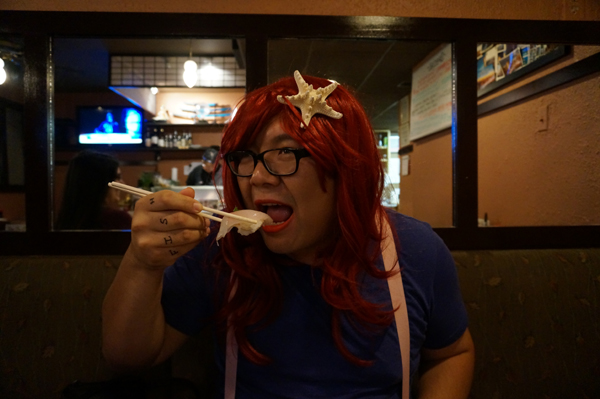 Halfway through our meal, a little boy came in. Based on his interactions with the people who worked there, I concluded he was part of the family. He saw us and walked up. “What are you supposed to be?” He asked. Part of him realized I must be wearing some sort of costume, but internet memes were beyond him.

He gave me a mischievous smile. “Bye mermaid!” he said, before he went back out for more trick-or-treating.

That night, we also learned that the daughter (?) of the sushi chef loves 90’s music. I was with Sarah and Heather, and we reminisced about middle school while singing along to what we remembered of 90’s pop music hits. 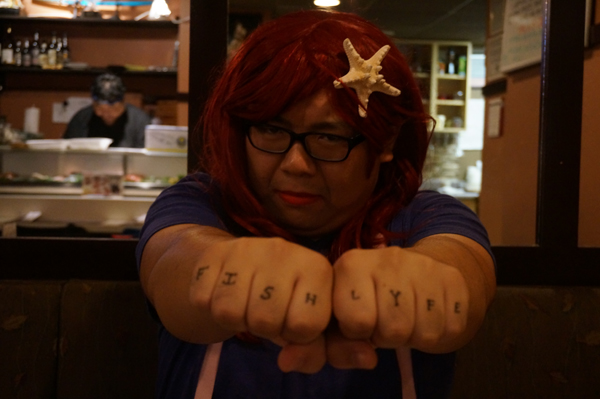 I believe the original intention of the task was to create material for some poignant social commentary. However, no matter what I was wearing, I was treated with respect and good food. With each visit, I learned a little more about the people behind the restaurant. There were no drastic differences in treatment, except maybe the next time I visit, I’ll learn a little more about the family behind Torajiro.

Permanent link to this article: https://storyluck.org/five-nights-at-torajiro/