Journey to the End of the Night – Rules Video

A Month Of Gaslighting… Group Completion

Have you heard the term, reverse pick pocketing? It’s when you slip something into a person’s pocket, purse, or wallet without them knowing. It’s easier to do than “traditional” pick pocketing, but both require a bit of courage and stealth. Because, this stunt was being done for our storytelling show A Month Of…, we decided to add stories to people lives. We procured the stories from strangers, brand new acquaintances and some long time friends. On the first day of the Printer’s Row Lit Fest, we asked everyone who stopped at our booth to help with the project. “Would you write a message to a stranger?” One of the first people to accept the challenge, a perky blonde girl, after failing to cajole her friends into writing their own missive. Came up with this:

Quickly, after finishing the above, she sketched a line through the pad and said, “Don’t read this 2nd piece of advice till I’m out of earshot. And don’t give this to a child.”

After some debate on what we should do with the above, McKenzie decided, “This advice was probably meant for me.” Suffice to say, knowing her conservative predilections, I found that humorous. And let her keep the note without further protest. We collected 10-20 of these little missives. Folded them up, and worked as a team to distribute them to unexpecting parties. Here is a note that was… while unique… more typical of what people seemed to be writing. 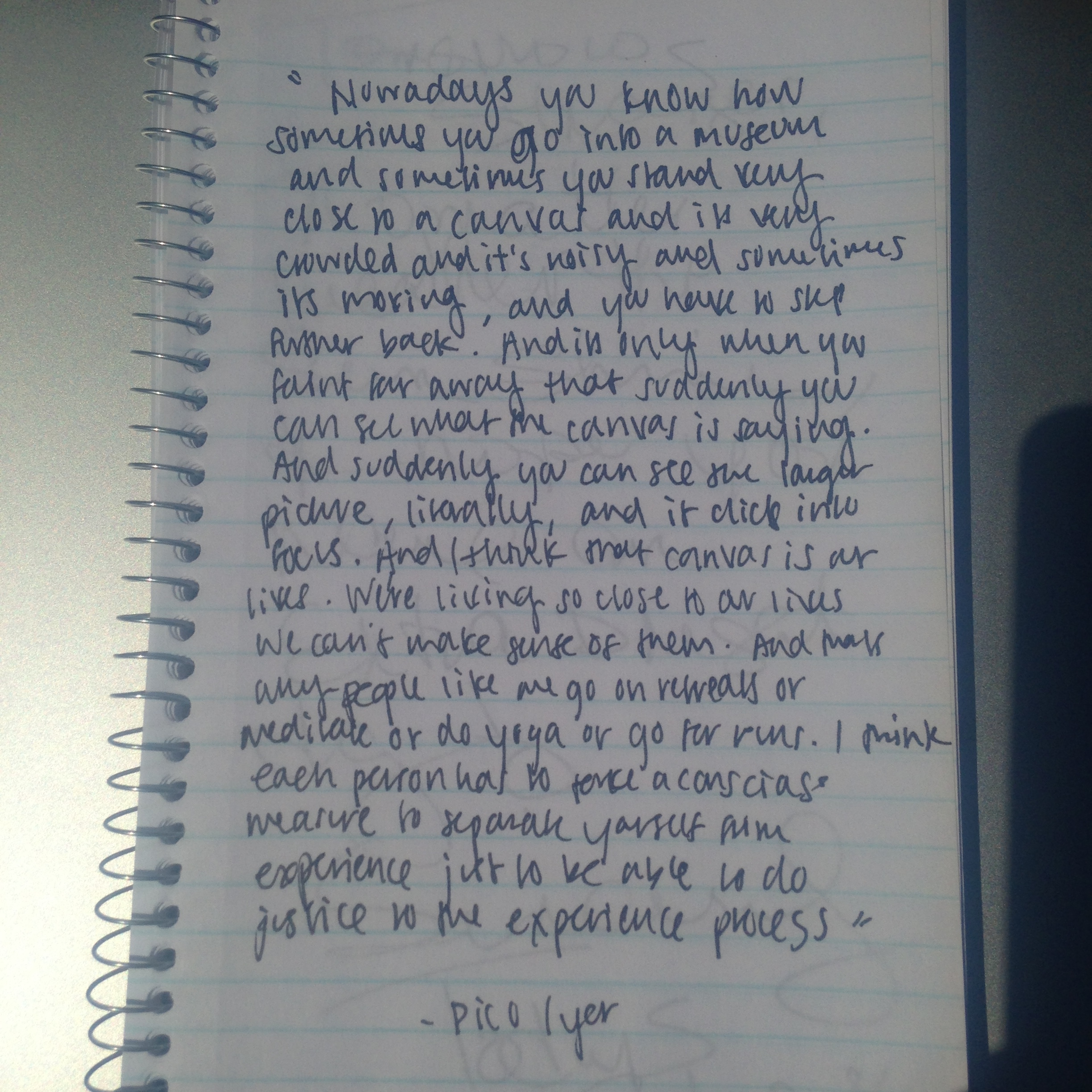 McKenzie folded the pieces of paper and wrote the words Story Luck on the outside. I decided not to read them before distributing. I wanted to be a divining rod. I wanted to move with purpose toward a target, but without interpretation. I didn’t want to be the arbiter of who got what, at least not consciously. Intrepid host and budding friend, Bonnie Fan came out too. She and I scanned for loose fitting jeans, backpacks, and open purses. Do you get close? Or try to reach from far away? After dropping half of them off in open purses, I feared I was planting too many on women. I started scanning for vulnerable men. Backpacks were the easiest on that front. Slipping the notes into the mesh pockets sewn to the sides took little to no work. Here you can see one of the sloppiest ones I dropped off.

The note, sticks almost entirely out of her purse. I watched as she bought a book, turned south and with that turn the payload nuzzled in deep, safe and snug with the lipstic, tampons, car keys, books, money and assorted accoutrements.

Another girl gave me a hard sell on a Chicago Tribune Journal. I felt bad for not saying yes… but it was a purchase I wouldn’t use. Wanting to offer her something, I said, “I’m supposed to reverse pickpocket these, but do you want one? A stranger wrote it, I don’t know what it says.”

She replied, “I don’t take notes from strangers.”

Okay, I thought and walked away. She called after me though, “I don’t take candy, either.” Fair enough.

There were a couple of people I failed to hit before I even made an explicit attempt. When they noticed me looking shifty, I’d open them up with conversation. There was a photographer… named… something with an L I think. We talked for five minutes, before I exited the conversation.

I got caught once. A boyfriend saw me slipping the note into his girlfriend’s knapsack. It was an impressive drop, save for that. Her bag was almost completely stopped but for a sliver of an opening. I didn’t let him make eye contact, I just scurried away and tried to blend into the crowd.

“That guy just put a love note in your bag?”

That’s what I thought was on his lips, but I can’t be sure.

This drop, on the Curbside Splendor woman, and the subsequent photo opportunity as the Haymarket Books boy told me about the Labor Movement’s early history in Detroit.

They might get tossed, crumpled after a day or two in a hustled and bustled bag. It wouldn’t take long for them to start looking like a random scrap of trash.

But that’s often how artistic endeavors work. If you get up on stage and tell a story to 100 people, how many does it effect? How many people really listen? If you leave a painting in a gallery, you rarely have any sense of the people it connects with outside of the opening.

Sometimes you tell a story to be heard, but sometimes you do it because you’ve got the story on your heart, and whether someone listens or not, you still have to tell it.

Permanent link to this article: https://storyluck.org/a-month-of-gaslighting-group-completion/