208 Pennies for Your Thoughts

People who intentionally glue coins on sidewalks intend to do one of two things: prank people, or make a statement. I’m not the prankster type, and I wanted to make sure people who happen upon the coins to understood that. I wanted the coins to be free of deception.

I’ve been accumulating spare change in a bowl since 2008. I emptied the bowl and counted the pennies. I had 208. I thought 208 was a good number because I wanted to use all the pennies in my possession and 208 factors nicely: 2, 2, 2, 2, and 13. It allowed me to get pretty creative with the arrangement. For the arrangement itself, I wanted something symmetrical, because I love symmetry. I originally wanted to do 16 layers of 13-penny rings, but 16 was not tall enough for my taste. After playing with the numbers, I settled on making a structure out of 26 layers of 8-penny rings. You better believe that all 208 pennies were facing the same direction when I glued them together. Even if they weren’t, how would you know? 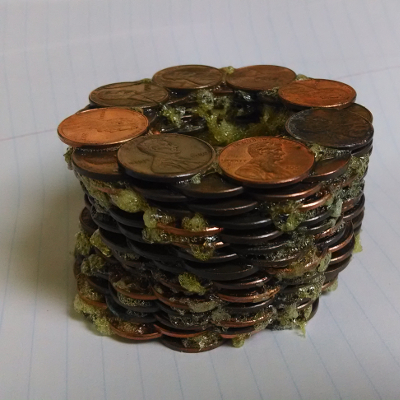 The end product was a hefty, fist-sized stack of metal. Glue oozed from the seams. I tried to pick off the large pieces of glue as it dried, but it was impossible to get it all. Still, I enjoyed picking tiny pieces of glue off the pennies—first with my hands, then with an assortment of sharp metal tools—almost as much as I had enjoyed making the penny stack. I even enjoyed picking flecks of glue off my fingers afterwards, though I wasn’t entirely sure whether I was picking off dried glue or skin as well. 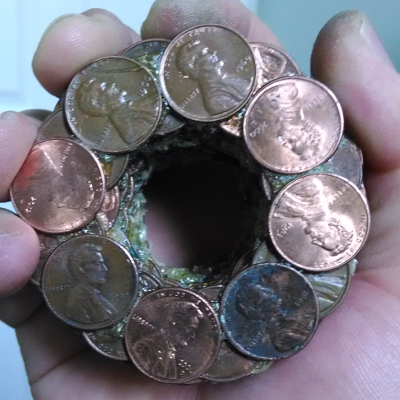 Next, I had to come up with a statement. It just so happened that I was feeling particularly fatalistic recently, having been watching True Detective and the departure of two of my roommates. Since I also like puns, I decided to coin the phrase “nothing changes.” The statement works on multiple levels, and I’ll respect your brilliant minds, dear readers, by not spelling them out for you. 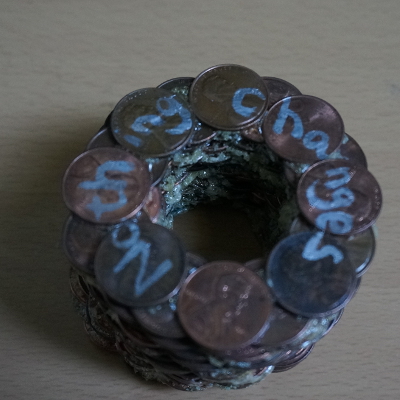 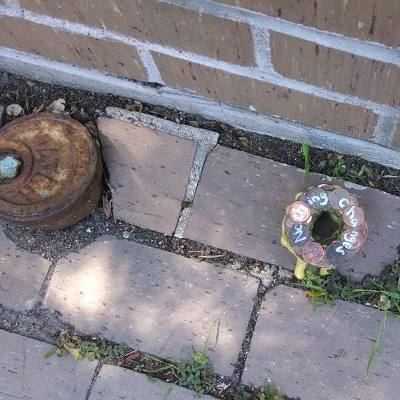 It’s been a few days since I glued the penny stack onto the sidewalk, and it was still there earlier today. I wonder whether it’ll still be there by the time we do the June show. Speaking of the June show, if you want to spend the evening of June 11th telling stories about the things we find, you should totally come to our show! Remember, if you too glue a coin to a well-trafficked stretch of sidewalk, you get into the show for free! You can find more information here, and I hope to see you soon!

Permanent link to this article: https://storyluck.org/208pennies/