Pride and Prejudice: The Art of Compliments

From Storyluck Chicago, it’s A Month Of… I’ve Never Met you, But You’re Great. Today’s write-up comes in three acts. Act I, Complimentary Pride, when a concerted effort by A Month Of organizers and audience members take compliments to the streets during the 2014 Chicago Pride Parade. Act II, Hugs So Good They Should Be Illegal, when two introverts muster up the courage to give hugs, free and otherwise, at one of the most iconic landmarks in Chicago. Act III, Com-plane-ments, when compliments on paper planes are carried near and far by the winds of the Windy City. Stay with us.

Our story begins at last month’s A Month Of show, when the audience members decided we should take it to the streets and compliment people. After a bout of brainstorming, an idea was born: we would make a banner made of tear-away compliments and cheer people up and on at the Chicago Pride Parade. People showed up at my apartment the Tuesday following the show to make the banner. At this point I would like to thank one of our audience members, Kimberly, for bringing her scrapbooking material, which was vital to the creation of the banner. We adorned the banner with hand-cut letters and stickers, and wrote tens of compliments at the bottom.

On the day of the parade, we stood in front of The Annoyance Theatre and called out to the parade attendees. Some people were quizzical at first.

“What is this?” They asked, to which Polly enthusiastically replied “Free compliments! Take one!” 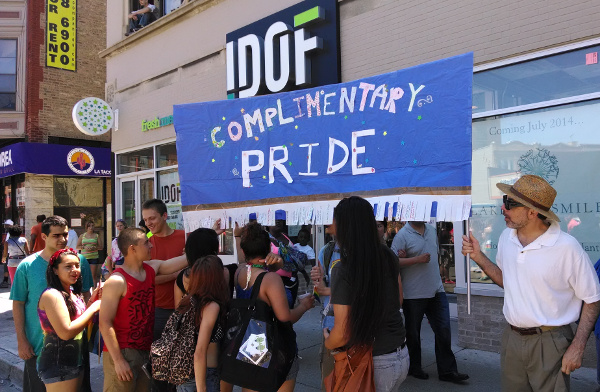 The first batch of compliments ran out in less than 10 minutes, and we had to cut up the bottom of the banner to make a new batch. In our down time, we shouted compliments to the crowd. “I like your headband!” “Your eyeliner game is on point!” 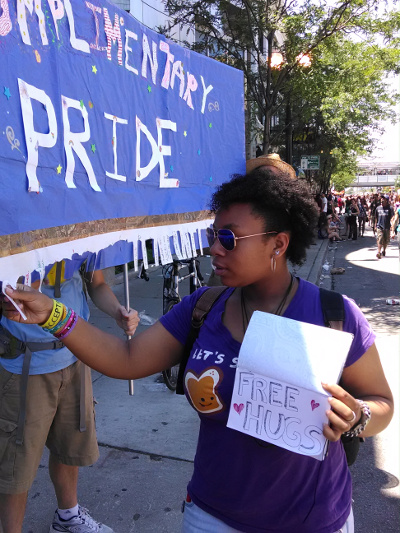 There were, of course, people who offered free hugs (and even free kisses!) at the parade. I’ve seen them before, but have never considered doing it myself. I briefly entertained the thought, however, and that was enough. When McKenzie called me days later, I said yes. I would accompany her in her quest to give hugs.

Act II: Hugs So Good, They Should Be Illegal

It was the Sunday after the Fourth of July. Millennium Park was filled with Chicagoans and tourists alike. Our story picks up on the stone benches east of the bean, where McKenzie and Duo were deep in conversation.

“Giving out compliments makes me really uncomfortable.” Duo mused. “I mean, I don’t know these people. Even if I do know them, I’m either indicating my approval of the truth or giving an elevated opinion that’s probably undeserved. That, or the compliment is purely superficial. And at that point, what differentiates compliment and street harassment? I don’t want to be part of the problem.”

“This is nerve-wracking for me too.” McKenzie chimed in.

“I just… UGH.” Duo let out an exasperated sigh and meant it.

“Should we abort?” McKenzie suggested.

“Yeah. We came all this way. Might as well, right?”

A mother walked by with two young children seconds after we held up the signs. She turned around and asked her youngest, a boy no older than 3 with the golden curls of a Renaissance-era cherubim. “Do you want to give her a hug? Go give her a hug! It’s free!” The boy ran to McKenzie, leaned in, and hugged her at her knees. The boy’s older sister followed, and McKenzie gave her a full hug. “Say thank you!” the mother called out.

“THANK YOUUUU!” the children said in unison before they ran back to their mother.

“Wow. That was fast.” I remarked cheerfully. One of my biggest fears was being ignored while holding up the signs, for that would confirm what I fear the most about humanity: that we are an uncaring bunch too self-absorbed to take in our surroundings, let alone interact with strangers. Two hugs in 15 seconds did wonders to dispel my fear though. I held up my sign and smiled at passersby.

A trio of women walked by us. One of them saw my sign, walked toward me, and put a dollar on my lap.

“Thank you!” I was genuinely shocked and surprised.

At that moment, another one of my fears became reality. A park security personnel descended upon us. “Hey, you can’t do that here.”

Making money was never our intent. I began handing the dollar bill back to the woman. As security walked away, she insisted that I should keep the money.

“It’ll go to charity.” I assured her.

“Here! Take a picture of us!” She called out to her friends and put her tan, muscular arms around me. The trio was clearly delighted by the whole situation.

We had to bug out shortly thereafter. In less than a minute, we gave out 3 hugs and made a dollar.

“I can see why they banned this at Millennium Park: it’s SO EASY.” I mused aloud. When we got back to McKenzie’s, we took our photos for posterity. 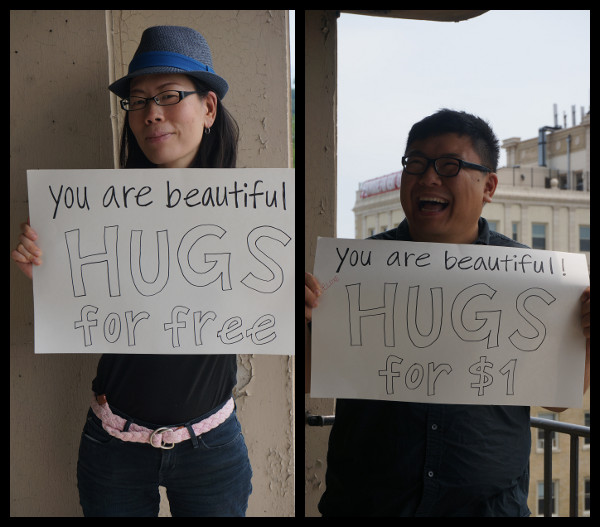 McKenzie lives on the 10th floor and has an open balcony, and I’ve been tempted to throw paper planes from the balcony since the first time I visited her condo. I tried to come up with compliments as I continued to struggle with the act of complimenting strangers. The compliments would have to be generic enough to have a widespread appeal, but specific enough to be relatable. I suddenly wished I had made friends with a cadre of horoscope writers. As I folded my paper planes and wrote new messages, McKenzie read through my rejected notes.

“These are good,” she said.

“Are they? I feel like I just wrote a bunch of stuff.”

“But it’s stuff people need to hear and often don’t get to.”

That’s it! That’s why we compliment people. It’s not to manipulate or to reaffirm or to embellish, but to provide the missing piece, to establish a human connection. To reinforce this notion and to supplement our paltry hug quota (total hugs; our hugs/minute figure was stellar), we also made some planes into hug vouchers. 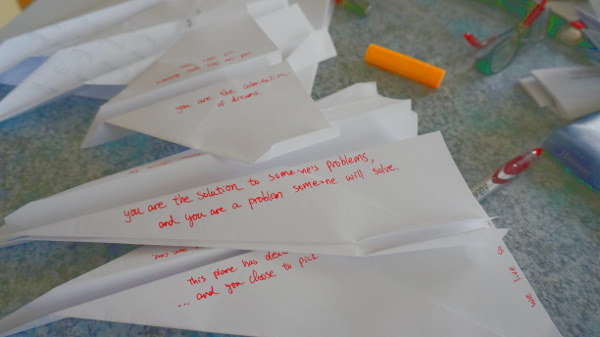 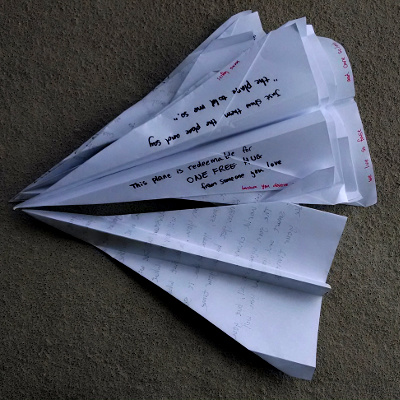 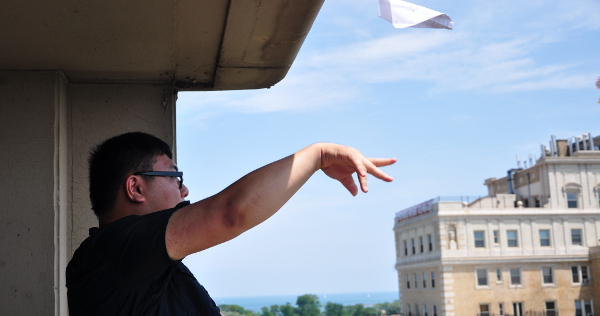 Today’s write-up is brought to you by Storyluck. Our producer is Dan Boyd. Our hosts are Cory O’Brien, Duo Yang, and Polly Yukevich. Our community coordinator is Will Clow. You too can become part of the A Month Of experience: as our producer Dan Boyd would say, “it’s SO EASY.”

Permanent link to this article: https://storyluck.org/11-compliments/