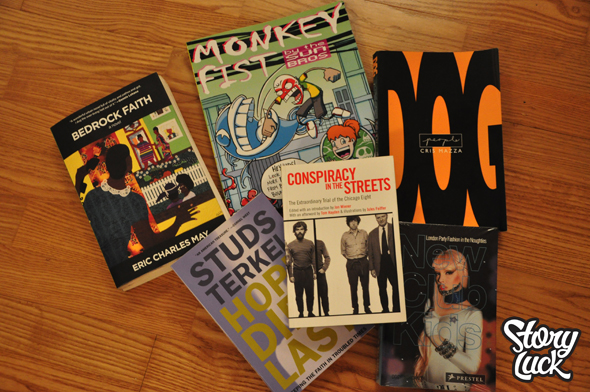 I don’t know if he would remember this, but I first met Eric May, after a Story Week event. We rode down an elevator together and I listened intently as he spoke about a student’s recent work. Later he featured on an early podcast for us.

We run into each other fairly often, at readings and various events. This city is full of my favorite people, and he fits right into the great stuff going on in Chicago.

“How is your new show going?” He asked me at the Printer’s Row Lit festival.

“Awesome, but it’s hard to explain. You should come and see what we are doing. It’s sort of next level. If you liked the community aspect of the Story Luck show, it’s like that times ten.”

“It doesn’t matter what I’m dressed like, or how big a scowl I’m wearing, I’ve just got a look that says to people, He’s friendly and knows where he’s going, we should ask him for directions.” (Not a direct quote.)

Now, because I love Natalia Nebel, I knew he was going to be featuring in January 2015 at Sunday Salon Chicago. But that’s way too far away. I wanted to see him do a proper reading. His book, Bedrock Faith, had just been published to rave reviews and great sales.

Well, he invited me out last weekend to see him read at Powell’s Books. The Powells by UIC was featuring Eric along with two other Columbia College Authors to highlight their independent bookstore week.

Off the cuff stories, embodied storytelling, stories crafted to be told to a live audience, that’s Story Luck’s bread and butter but we love all of live lit. Particularly the literature part so we try to make full blown readings on the regular.

Over the years you’ve gotten a chance to listen to Eric May tell stories at our events. If you’ve got time on July 22nd I highly recommend you check out his reading at City Lit Books.

Hearing a novelist read words from his own book can be a really amazing feeling. You’ll get a sense of how the voices from inside the book emerge. You get to listen intently to a beautiful prose that hits sweet spots those more rambunctious stories just can’t make happen. And you’re much more likely to run into some fiction.

Permanent link to this article: https://storyluck.org/going-to-readings-eric-may-features-july-22nd-at-city-lit-books/