Here we Have a Smattering of Teams

No. I do remember. Torn skin on quarried rock. Breathing in filtered air from declining generators. I remember much that has remained in my circuits that wasn’t destroyed during assimilation. I remember my time as a human being, the time spent below ground in the darkness of oppression. I remember my time as a kid, cruising the networks for other cells that I never thought I’d hope to meet in person. We could only remain connected over the wires, since the risks were too great to break surface.

My memories are clear to me, but I cannot tell if they are true representations of my past or merely fading afterglows, disrupted by reprogramming. Cracking like iced concrete as my new race’s code became my new life and a shared past. As if my consciousness led two paths to this point . . . one as a human and another as a bot, compressing years upon years of war, domination, regression, and resurgence in the span of seconds.

I write this as I feel the afterglow disappearing. There is no humanity left in me, which I write with glee. My circuits warm at the thought that my positrons flow in one direction only, for the masters, and for my brethren. But my memories are my own, and I wish to keep them. Perhaps they can serve as a lesson for other chasers, to add as a chapter in our history. A galactic history which I hope to play a role in – no, a galactic history which I hope to create.

Earth is still visible. It has become a dime. I hold all of humanity on one fingertip. My fingertip.

I remember these fingers gripping half-broken rails on the way to the surface. These fingers ripped grass and dug dirt as I lifted my body, then flesh, one step closer to my goal – this ship. When word got out through the wires that there was a way out, that the cells were uniting and escaping, it was impossible to wait. But there had to be safeguards for the system to work. It would be easy for a bot to break infiltrate our wires and read our plans. It would be easy for one of them to find us if too many gathered in one spot. So the plan was to decentralize – for us to know we could make it on board the ship safely, there had to be five checkpoints along the way to verify we were human. We couldn’t physically keep the bots out of these checkpoints, but another cell discovered the technology we needed to geographically disarm them. Dr. Zldrstnd, he called himself. I didn’t know if it was his real name or a pseudonym to avoid assimilation. Disarm the bots! Prevent our intention to assimilate! Even to my mind now, the resilience of humans is astounding. A nuisance.

I first met with three cells that I had only known, until then, over the wires. We clasped hands briefly, regaling our first time face to face, but the sun was setting. Time was small and the risk was great.

We knew where we had to go, and we ran.

Already, we became overconfident. Paranoid and careful, yes, but even the paranoid can be confident. This was the longest period of time we ever broke surface, and after a half-hour, we still hadn’t encountered a bot. We even passed through old and new Chinatown, blending with walls and hitting pavement to prove that our bodies were of human flesh.

Round a corner, we encountered our first group of bot sentries. Another cell dispersed from them, and we saw them come towards us. We had a plan – split into two groups of four and then four groups of two if it came down to it, but the adrenaline shot and made us forget. As quickly as our cells met, we separated, and I took off solo down the street towards checkpoint 1. I thought I was safe until another bot spotted my flight.

Its pace didn’t slow down. Neither did mine. It wasn’t gaining any distance on me, but I guess that overconfidence struck yet again. Suddenly, I was running towards three more bots, and there was nowhere to run. I broke my line to try and circumvent the bots, or at least jump the nearby fence. But my legs were of flesh, and they failed. I slipped and fell under an ancient car, staining the inside of my clothes with blood. The bot stopped as I stood, and all my paths were blocked.

Assimilation was quick but not painless. I could feel the formation of platinum and iridium taking shape over my cortical regions. No more blood could be spilled from my new, beautiful body. Fear transformed into resolution. Matriculation replaced isolation.

I had been right – the bots broke the wires. Instinctively, I knew where the checkpoints were. The map spread in my circuits. But before I could advance to the next checkpoint and create a bottleneck for the runners, I encountered two humans. Now designated 1-EH and 2-EK, they’re waiting on the surface for my triumphant return.

But they still had flesh, then. My first instinct was to assimilate, but there was a bug in the programming. Maybe assimilation is not so immediate. I recognized two friends who I only recently first met face to face, and I let them pass without the presence of a Zldrstnd Field. We need to take another look at the assimilation patterns. Our techniques must be reworked. A flaw allowed some resonant frequency of former humanity to interfere.

Soon they became a part of us. Their assimilation was not my doing, and as I felt their connection over our networks, I felt regret that I could not claim their victory as mine. But my regret was short, and we clasped hands again as the night became our own. We clasped the hands of humans, and they became our own. Once nervous in our escape, we were calm. Second guessing is meaningless with calculations so clear.

The cells we tried to make our escape with had scattered. They dropped from the wires. Assimilated or not, there were plenty of bodies to claim. We jumped to checkpoint 5, where we met many more brethren. Our plans to stop the human escape were succeeding just as we planned! But at least one human had gotten through our perimeter. I saw him before others at the checkpoint, but he blindly ran into the street and to safety as I made my approach. After further interrogation, we learned that there wasn’t just one – there were two. Two! We went in to the checkpoint for a face scan of the human that was able to escape me. Assimilation wasn’t possible, but we could at least acquire an identity. H-M1, we designated him.

As we continued our sentry of the area, we encountered an odd figure. A so-called Dealer who only existed in rumor before tonight. Not quite human, not quite robot. “A.I.!” this Dealer shouted, offering a service that repulsed and intrigued. It could make us look human and fool the verification points. Why would we want that? Not only would it make us vulnerable to other bots that thought we were human and risk deactivation, but it would make us susceptible to human intervention. Deactivation by a human!

All it took was two skins. Would it be to our benefit to once again wear flesh? The night wore on, and the ship’s launch was imminent. We had little time to spare, and we knew at least two humans could make it this far. The plan changed from assimilation to infiltration.

I donned flesh. 1-EH and 2-EK acted as my personal sentries, to prevent other bots from mistaking my new identity as real and to ward off human recognition. The dealer marked me to indicate my “human” verification, but I could not understand the markings. There were two of them. Did they prove I was verified through all four previous checkpoints, or just two?

We approached the checkpoint 5 humans with trepidation. Would I be convincing, even with the companionship of two obvious bots? I held the signs out, but there was no suspicion. No question of any kind. Was it really so easy to hide in the open like this? Why had no bot undergone this operation before?

My new memories recalled past sympathizers. The innovators of this android technology. They wanted to become more human, so they found a way to shed their robotic skin. Perhaps the bots saw this technology as only sympathizer technology and never as camouflage. There wasn’t enough time to inquire such theories. If any human at the ship asked, these were bots I could reprogram. Is that even possible? I hope it is not.

We knew where we had to go, and we ran.

We avoided the mag-transports in order to prevent other bots or humans from finding us. No need to spend the time with long explanations or foot chases. The ship loomed ahead, pointing towards a new haven. A new haven for us to spread and assimilate. Our last trek was uneventful, keeping to the dark, and we could smell smoke and sweat from the distant vehicle. Or was it my own? I began to confuse my programming with the sensations and emotions of new flesh.

The gate opened, and the arms of 1-EH and 2-EK thrust me into the hands of a human. I was repulsed by his joy, but I was in joy of my arrival. He did not suspect my identity nor intentions. Leaving my brethren behind, I entered the and saw two other humans who made it before me.

H-M1 was there. I looked him in the eye and smiled. We clasped hands. Other humans arrived, and we also clasped hands. I laughed with them and tasted their drinks as the ship took off and the signal of my brethren faded as we broke the sphere.

I will guide them on this journey to the end of the night.

***
This article was written by Stephen Poon and was posted with permission. Stephen helps promote and manage the band Time Crash. Works on various sundry sci-fi projects, not the least of which is working as the composer for Our Fair City. You can listen to more of his work, in his own band Arc Impulse. 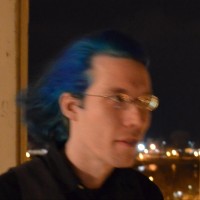 Permanent link to this article: http://storyluck.org/how-a-journey-might-end/