Girl With a Face Tattoo – A Month of Gaslighting

I used to help out with a comics studio called Sunbros Studios, and this year for the comics convention C2E2 I returned to the booth with Beijing opera-style Monkey King face paint, to emulate the main character of their book Monkey Fist (an adaptation of the Journey to the West tale). Afterwards, I met up with a friend at Yassa African Restaurant, a lovely Senegalese eatery on 35th and King drive.

I walked into the place (early) and every mother, cousin, sister’s baby’s friend’s cousin, the waiter, the owner, and the host turned and stared at me. I still had full facepaint on. 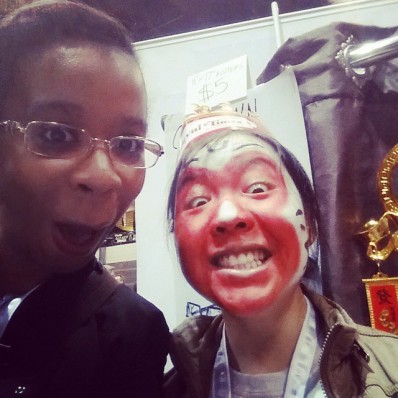 For this month’s theme, we talked a lot about what we could do to create a sense of illusion. I have been listening to the audio recording of the original play by Patrick Hamilton and have been rather traumatized. Certainly, we want to avoid the connotations of sociopathic (and homicidal?) manipulation. Turn it around, perhaps.

Dan, Duo, McKenzie and I ended up discussing this at Triple Crown. As the plates of dim sum arrived, I thought of my entrance into Yassa African. Instead of creating illusion within a space, I could be the illusion. With my face.

Here’s the idea: become a regular somewhere (probably a coffee shop, because I’m not made of money) – and by regular, I mean show up a few times within the same time span. Nothing would be unusual, except for a giant face tattoo. The next day, same drill – except it would be on a different side, or it’d look completely different. Or maybe I would find an exceptionally hipster venue and copy someone’s tattoo onto my face. If I stenciled, I could even bring in a few friends with the same rotating look.

A few mysteries to be solved: where should I go? When? Who should I target? Maybe I could find an older Asian lady to copy that tattoo onto her face and become Future Bonnie?

The idea is illusion. Do people see the world shift and convince themselves they remembered wrong? I still do that kind of magical thinking sometimes (maybe my keys were spirited back into my bag?)

The bigger question is, why not get a real face tattoo? I’m open to designs, friends. I think a giant Chinese symbol for peace-courage-faith-love would be an acceptable candidate.

Permanent link to this article: http://storyluck.org/girl-with-a-face-tattoo-gaslighting/