A Month Of… Next Stop Unexpected!

The Best Elevator in My World

Cory’s Elevator Task: It’s Raining Men, and Those Men Are All George Washington

0 votedvotevote
Pursuant to the assigned directive, my associates and I induced fiduciary precipitation in a dumbwaiter. In other words, me and my homies brought a stack of bills into an elevator and made it fuckin’ rain.

I’m not sure how we originally arrived at the idea (we being me and Miss Polly “The Uke-meister” Yukevich), but it appealed to us on a number of levels. One, it would definitely be unexpected. Two, a rain of dollar bills has the potential to really brighten someone’s day. Three, we really wanted to treat a bunch of business professionals like strippers.

PREPARATION:
We figured we should make it rain on a weekday, since that’s when most elevators in the Loop get the heaviest traffic. Ideally we were looking for a building tall enough and busy enough to have an express elevator, so that the skipped floors would give us more time to do our thing. We figured fifty dollars would be enough to achieve the desired effect. Aside from that, we needed business clothes (for disguise) and a portable speaker (for blasting dance music in the elevator). During our practice runs in Polly’s apartment, we also determined that it’s hard to make it rain effectively unless you are standing on some kind of elevated structure, such as a bar at a strip club or – in our case – a plastic crate.

Highly practical in a variety of situations.

DAY 1:
We woke up at an hour no artist should ever be forced to interact with, and headed downtown for breakfast and reconnaissance. Polly had leads on a few promising elevators. The first was in the Chicago Temple Building. While the choral elevator music was quite soothing, the building was not crowded enough for our purposes. Fortunately, the Daley Center was right across the street.

Here is what people on FourSquare have to say about the Daley Center:

“This is a great place to go to have the life sucked out of you.”
“If you hate your job come spend a couple hours here and you’ll be happily running back to your office”
“I hate the City of Chicago with a passion.”

These comments are not far off the mark. There may have been, at some point in Chicago’s history, an architectural dark age in which the design of the Richard J. Daley Center was considered acceptable. Today it is a rust-brown monolith that squats over its eponymous plaza like an enormous cage full of exceptionally well-dressed rats. These miserable souls scurry from floor to floor in cramped, dimly-lit express elevators, praying for sweet slender-fingered Death to release them from their torment.

In other words, it was ideal for our purposes.

Unfortunately I was laid low by a migraine before we could complete the task, and by the time I recovered the elevators were no longer as crowded as they had been during peak hours. We would have to wait until Wednesday…

We sat in the Daley plaza, shivering from equal parts wind chill and nerves. The plan was simple. I would enter the elevator with my crate, and stand near the back. As soon as the doors closed, I would mount the crate and Polly would start blasting “Sexy Back” at top volume. A third accomplice would film the results as I rained money on the unsuspecting passengers, then stay on board to document the aftermath. The plan was simple, but we were worried. The Daley Center is crawling with police. You have to pass through a metal detector just to get in the door. Would we be arrested? I had work later in the day, and I couldn’t imagine how I would explain my absence if it came to that.

Also, I really had to pee.

But you dared me to do this, you bastards. I was compelled to proceed. We selected the Bean as our rendezvous point and entered the building. Once we were inside, strict radio-silence was the rule, to avoid betraying our intentions. We broke this rule almost immediately, but whatever.

We boarded the express elevator that serviced floors 23-30. The passengers were a mix of working-class defendants and smartly-dressed lawyers. I made my way to the back of the car and placed my box on the floor. The man standing next to me stole a glance at me as I stepped onto it. Then the music began.

“IT’S TIME TO MAKE IT RAIN!” I shouted, and the dollars began to fall. A woman to my left burst into laughter. A man to my right muttered “…What the fuck?” I distributed my payload with time to spare, and filled the rest of the ride with extremely smooth dance moves:

When the elevator doors opened, we made our escape.

Right past a police officer.

Of course, we kept walking. What else could we do? I was filled with dread, but my bladder was full of urine, so I made for the nearest restroom. When I got out, I had a rather chilling text message:

“Get out. They’re calling a sergeant. Ditch the crate.”

All exits of the Daley center are covered by police. My bright red milk crate stuck out like a horse dick in a nunnery. But I was not about to ditch the crate. That shit is my bedside table. So I opted for plan B: Walk confidently towards the cop guarding the exit, and trust in the fact that I hadn’t actually broken any laws. At least, no laws that I knew of.

The cop stood blocking the exit, making a point of noticing me and my crate. Ten, five, three feet away. As I reached the exit, he glanced to his side and made a motion to the other cops waiting in the wings.

I was so relieved I probably would’ve pissed myself if I hadn’t already used the bathroom. But I still took some precautions: as soon as I was outside I ducked into the underground mall, disrobing as I went. By the time I met Polly and Gretchen (our camera lady), I looked like this:

That is to say, victorious.[/caption]

But while I was making my escape, Gretchen was having an adventure of her own. The cop was none too pleased to arrive in an elevator full of money, and she was not the only one. Apparently one of the other passengers really hated elevators, and was freaking out. Meanwhile, the laughing lady was still laughing, and one of the lawyers was attempting to gather the money, allegedly for charity. This is what that looked like:

Gretchen wisely chose to stop recording when the cop and the lawyer started facing off about the destiny of the dollar bills. Citing the fact that the money was “evidence in an investigation,” the cop confiscated all of the money before exiting the elevator on the 28th floor.

At least, she thought she’d confiscated all the money. After the cop left the elevator, the only riders left were Gretchen and the woman who was scared of elevators. As they stood in awkward silence, a dollar bill that had landed on the woman’s shoulder slipped off and drifted to the floor. The woman jumped.

“I swear, I had nothing to do with this!” she said.

And with that, the woman bent down and picked up the dollar bill. Mission accomplished. At least one person got a dollar, despite police intervention.

So what have we learned? I’m still figuring that one out. On the one hand, I’m disappointed that 98% of our money ended up in the hands of the police, but on the other hand it’s tempting to see the absurd confiscation of our money as another step in the performance, another part of the bizarre experience we were striving to create. It’s definitely a big part of the story. The other thing I found interesting is how our little prank brought everyone’s silent inner elevator monologue to the surface. It’s easy to imagine all these bodies packed into this tight space, each person muttering his or her own private mantra. What we did shocked these people into expressing their personalities out loud. A woman laughed. A man was astonished. Another man was either greedy or altruistic, depending on whether you believe him. A woman was terrified. And while I regret terrifying her, and see her terror as an indictment of a certain lack of sensitivity on my part, my guilt is at least partially assuaged by the fact that she got a dollar for her trouble. Basically, what I’m saying is that when you create a moment like this, you’re basically taking the pulse of the human current around you. I don’t think we changed any lives, but we definitely changed some days.

This is me, as well as two ladies who will be getting into the show for free in August! Polly had never been to the Bean! 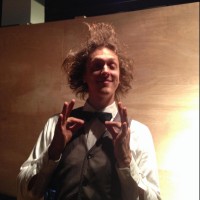 Permanent link to this article: http://storyluck.org/corys-elevator-task-its-raining-men-and-those-men-are-all-george-washington/